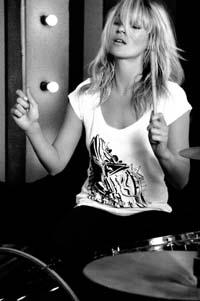 We know it was a quiet news weekend for the fashion scene, but that’s no need for headlines hinting that supermodel Kate Moss’s earning power has dipped to a “mere” £1 million per annum, as some media are reporting.
Both the Daily Mail and NineMSN report that Moss’s Skate LLP business earned £1,091,304 last year, based on Companies’ House ﬁlings. Compared with the former business, Skate Enterprises, this represents a drop of some £4 million on 2008.
The Mail even has a ‘ﬁnancial expert’ commenting to make the story look more legit.
What is conveniently ignored is that Skate LLP forms only a portion of Moss’s income. It’s more than likely that her 2009 earnings will be close to the $8·5 million that Forbes estimated last May.
We don’t doubt that Moss’s earning power is not as strong as it was ﬁve years ago, but her star has far from faded.
Even accounting for budgetary cuts, Moss—with endorsement deals with Longchamp, Coty and Topshop—is unlikely to slip below her 2008 Forbes ﬁgure of $7·5 million. Each one of these deals is a multi-million-dollar one.