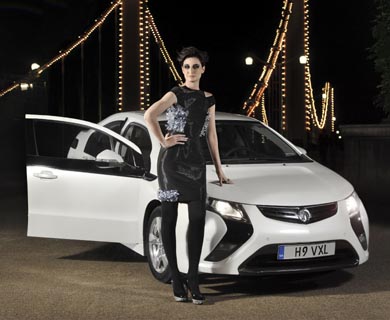 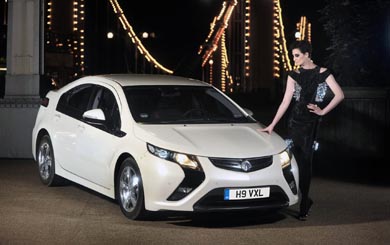 Vauxhall, GM’s British brand, launched its version of the Chevrolet Volt plug-in electric hybrid at Chelsea Bridge on June 29, with model Erin O’Connor wearing an electric dress designed by William Tempest.
O’Connor’s dress features over 1,000 lights and Swarovski crystals. It was tailored to her ﬁgure. The dress’s panelled styling, says Vauxhall, was modelled on the car.
In a release, Tempest says, ‘When Vauxhall approached me about designing a dress to celebrate the Ampera, I was really excited. My thoughts for the design immediately turned to bringing to life the electric nature of the car, and what better way than with an actual electric dress?’
Tempest’s fans include Emma Watson, Alexa Chung, Lily Allen, Leona Lewis, Kate Moss and Victoria Beckham.
The Opel Ampera, which is the name the car will wear when it goes on sale on the Continent, and the Vauxhall Ampera, its British name, will appear in showrooms in 2012.
GM is aiming to go one better than the Toyota Prius: instead of being a petrol car that has an electric motor as a back-up, the Ampera is an electric car that has a petrol motor as back-up. The electric motor has 40 miles’ range, enough for the average trip. With a 240V outlet, the car can be fully charged in four hours.
The Ampera’s maiden voyage concluded in London, appearing on UK roads for the ﬁrst time in June.