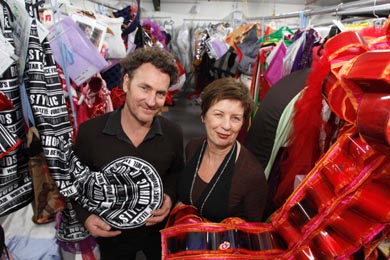 Acclaimed fashion designer Doris de Pont, and Christchurch sculptor Phil Price, whose Zephyrometer and Protoplasm kinetic artworks are Wellington landmarks, are joining Suzie Moncrieff on the Montana World of Wearable Arts’ judging panel. They have already completed the ﬁrst round of judging.
For the ﬁnals in September, US-based New Zealand expat Mark d’Arcy is the international guest judge, whose appearance is supported by Air New Zealand and Tourism New Zealand.
D’Arcy is President of Time Warner Global Media Group and Senior Vice President, Time Warner.
Special effects’ guru Sir Richard Taylor once again serves on the judging panel to give the annual Weta Award.
The choreography for the 2010 show will showcase approximately 190 ﬁnalists who have been chosen to compete in the Montana WOW Awards Show from an array of more than 300 entrants from all over New Zealand and the world.
Entries hail from, inter alia, the USA, India, the UK, Germany, the Netherlands and Sri Lanka.