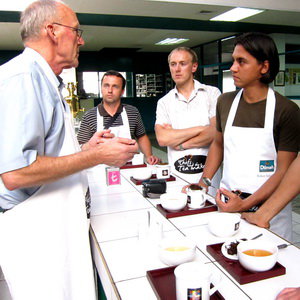 Some years ago, when Lucire interviewed Twinings boss Stephen Twining, we learned that there were distinct teas to accompany different meals of the day. That gastronomic culture is shared by one of his competitors, and arguably Sri Lanka’s most famous brand, Dilmah—which takes the idea of tea and great food a step further.
Yesterday, 14 exceptional chefs arrived in Sri Lanka for the second Dilmah Chefs and the Teamaker adventure. The event was ﬁrst held in 2008, when nine Australian chefs were hosted by the company to a tea culinary journey around Sri Lanka.
The 2010 chefs are Matias Palomo from Chile, Tomas Rimydis from Lithuania, Shane Yardley and Simon Gault from New Zealand, Robert Schinkel and Frank van der Zande of the Netherlands, Jaroslaw Uscinski from Poland, Peter Kuruvita and Bernd Uber from Australia, Shahid Latif of the Maldives, Mario Holtzem from Belgium, Mukul Agrawal from India, Radim Gerlich from Czech Republic, and Rohan Fernandopulle from Sri Lanka.
Their culinary exploits can be found online at the Chefs and the Teamaker blog, and the Dilmah Tea Club on Facebook.