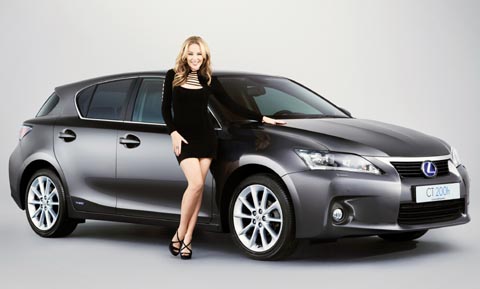 We’re not too sure if they’re a good match, but the money’s there, as Kylie Minogue promotes the Lexus CT200h hybrid hatchback, while Lexus becomes the headline sponsor of her UK Aphrodite—les Folies tour.
In 2002, Ford had Minogue endorse the StreetKa roadster, with a company exec saying, ‘StreetKa and Kylie have a lot in common—they are both small, beautiful and stylish.’ The idea: to get consumers connected to the StreetKa prior to launch. ‘Linking with Kylie will allow us to show this car before launch in an environment where we know StreetKa will have great appeal,’ said Earl Hesterberg, then Ford of Europe’s VP of Marketing.
While Lexus wants to boast the CT200’s eco-friendly credentials, it’s a far larger car, and styled to look—dare we say it—stodgy.
The connection is high-tech: Minogue’s tour is said to be one of the most technically impressive, something which Lexus already is.
The claims at the Toyota division are similar to those at Ford over eight years ago: ‘Kylie has energy, style and exceptionally popular public proﬁle that will add huge appeal to our new model and our brand, reaching out directly to the new customers we believe will form the core market for CT200h,’ says Lexus director Belinda Poole.
Minogue is older now, though arguably her fans remain across the board. We still think Lexus has an uphill battle to make itself hip to the Kylie-fan market, especially with a car that looks somewhat overweight. Lexus may be technologically advanced—we know that from the LFA supercar—but to us, that doesn’t resonate with the image of whom the media still call the ‘pop princess’.