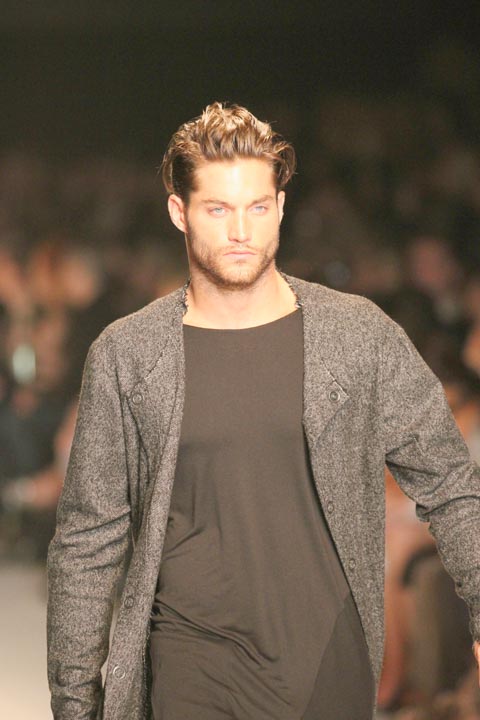 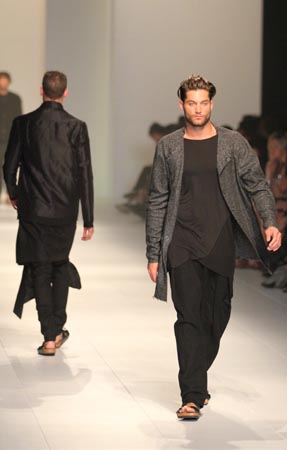 Above Song for the Mute.

The second runway presentation for L’Oréal Melbourne Fashion Festival featured the festival designer award ﬁnalists. Those in the running for the prize were Arnsdorf, Bassike, Dress Up, Ellery From Britten, Laurence Pasquier, Lul Hon and Song for the Mute.
Arnsdorf designer Jade Sarita Arnott showed a collection true to form with classic pieces in the brightest colours—a colour blocking dream. A ﬂesh tone base added an new element to a few of her looks.
Deborah Sams and Mary-Lou Ryan gave a strong military feel to their comfort classics for Bassike. They add tweedy jackets and voluminous cropped khaki trousers to both their menswear and womenswear. Proportions were adjusted to add interest to outﬁts: cropped coats over blazers over button-up shirts with the cuffs peeking out below those of the outerwear.
The love affair this group of design houses are currently having with shirting became evident when Dress Up took to the catwalk. Designer Stephanie Downey created garments with simplicity at its most considered. In this collection, she returns to the tie front shirt in an array of beige and greys for the high-waisted trousers. Her never-tight pieces have the appeal of a most coveted vintage ﬁnd.
Ellery’s signature sex appeal materialized in the form of full short skirts and party dresses in a pale pallet. Kim Ellery developed the signature knit jacquard fabric from a print of snakeskin which brought interest to the collection.
Showing only menswear, From Britten strapped together all their suiting with belts of leather, albeit in a subtle and stylish manner. Jackets were strapped shut, pant cuffs were bound tight and, where pants would traditionally button, leather strapping did the trick. The layering of many different collar styles in the one ensemble differentiates the look from straight shirting.
Laurence Pasquier’s French heritage shows in the polite essence of the collection. She and Trish Fairbairn create sexy, grown-up clothing. When colour was chosen, the most intense hues were selected for maximum luxurious effect.
Malaysian native Lui Hon of Project Runway Australia 2008 delivered intriguingly ﬂuid menswear and womenswear. Whether pale or dark, all looks mere multi-textural. Plain Ts were purposefully and artfully skewed with wrapping of fabric being the focus of the collection.
The highlight of the show, and the winner of the LMFF Designer Award, was Song for the Mute. Lyna Ty and Melvin Tanaya are a thoroughly educated duo. Between them, they have won ﬁrst-place scholarships for the White House Institute of Design, studied at Acedemia Italiana Di Moda and the Billy Blue School of Graphic Arts, and achieved two master’s degrees (one in design and one in commerce). They are well prepared to head a label and see it thrive with a nod and some help from LMFF.
Song for the Mute’s moody menswear has been striking a chord with fashion-forward men for three seasons now with the same grimy polish shown consistently throughout. From their ﬁrst collection, they deﬁned themselves as a brand to be noted for their fabric choices and continue to choose fabrics that feel organic, earthy, or of the elements. Linen, cotton with metal, silks, wool, mohair and deer skin, often in oil-slick black, create textural diminution, especially in their most recent collection, Milieu. These fabrications come together as draping scarves, big cardigans and jumpers, long shirting, slouchy shirting, blouson trousers, skinny pants, entry-level skirts for men, and skivvies. Long zippers fold down on themselves as a feature of the outerwear. The whole look has a moody ease and the brand has a deﬁnite aura and presence.—Devin Winter, Melbourne Correspondent