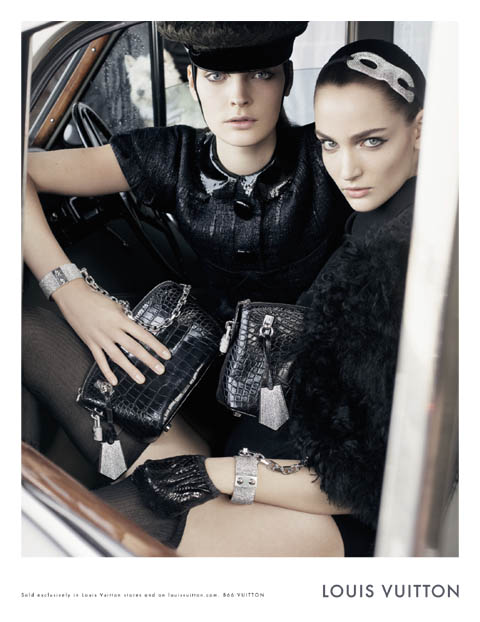 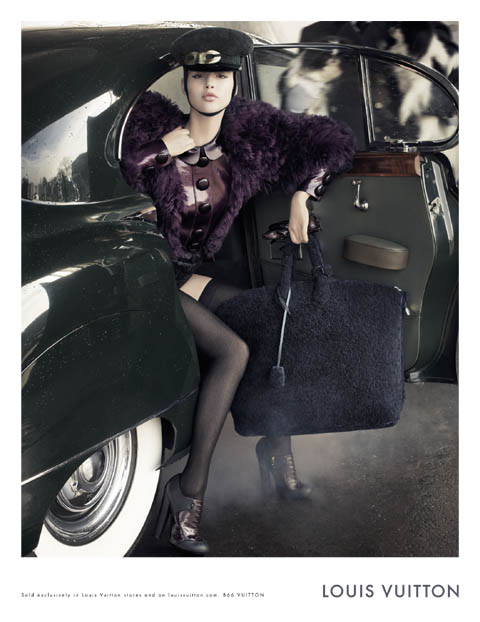 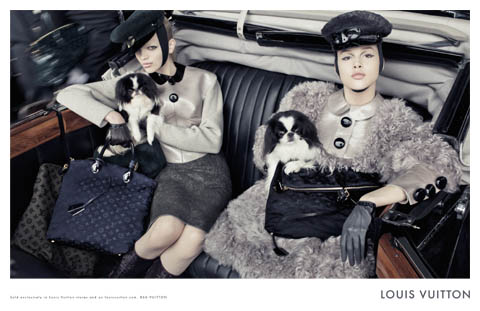 As revealed in Women’s Wear Daily ten days ago, Louis Vuitton’s autumn–winter 2011–12 campaign features models Zuzanna Bijoch, Daphne Groeneveld, Gertrud Hegelund, Nyasha Matonhodze, Anaïs Pouliot and Fei Fei Sun.
Louis Vuitton has sent a little more behind-the-scenes info on the campaign, with nine images photographed by Steven Meisel.
‘For fall–winter 2011–12,’ says Louis Vuitton artistic director Marc Jacobs, ‘Steven Meisel and I met and decided we would do this wonderful story of beautiful vintage cars, little dogs and fresh-faced young women.
‘It’s a very classic scenario, and of course it suggests travel, but I think we gave it a fresh, modern and sometimes a little bit naughty, tongue-in-cheek spin.’
The campaign involved the six models, ﬁve vintage cars and their chauffeurs, and fourteen pedigree dogs, shot at a disused aerodrome in Brooklyn, New York.
The story is the journey to a Louis Vuitton fashion show, where the woman leaves her hotel, dog in tow, and enters her limousine. By using some luxury cars from the past, Vuitton highlights the materials used in the collection: patent leather, lacquered python, shearling, and Mongolian lamb.
‘The season’s star accessories [are], among them, shiny rubber boots, shearling ofﬁcers’ caps and glazed lambskin gloves as well as the variations on the iconic Lockit handbag, including the Extraordinaire clutch in alligator with its diamond-paved padlock and handcuff,’ says the company.
The campaign breaks in August 2011 issues of magazines worldwide.