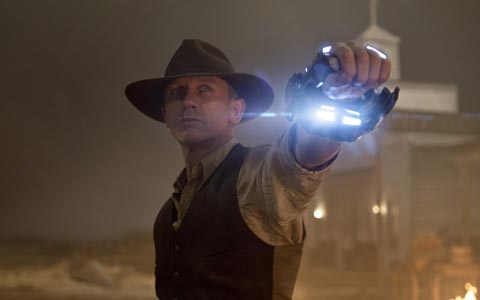 Daniel Craig and Harrison Ford headed to Comic-Con in San Diego, Calif. to première their new ﬁlm, Cowboys & Aliens.
Ford said that the venue was ideal for the ﬁlm, as the sort of fans that gather at Comic-Con were those that they made it for.
Stars Olivia Wilde, Sam Rockwell, and Keith Carradine joined Craig and Ford, as did director Jon Favreau, producers Steven Spielberg, Ron Howard, and Brian Grazer, DreamWorks CEO Stacey Snider, actors Calista Flockhart, Nina Dobrev, and Joel McHale.
The ﬁlm, set in Arizona in 1873, has been adapted from a graphic novel. It will have its UK release on August 17.
Initial Twitter reviews from the première were mixed, though Variety and The Hollywood Reporter were generally positive.