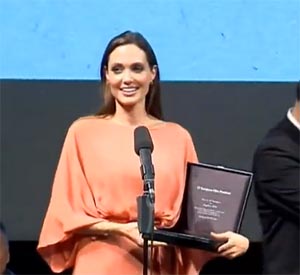 A radiant Angelina Jolie accepted an award to a standing ovation on the last night of the 17th Sarajevo Film Festival for her acting and humanitarian work.
Organizers said the special award, dubbed the Heart of Sarajevo, recognized Jolie’s work in bringing attention to the refugees of the Bosnian war in the 1990s.
Jolie had visited Bosnia several times as a UNHCR ambassador last year and her directorial début, a ﬁlm called In the Land of Blood and Honey, depicts a love story between a Serbian man and a Bosnian woman.
The ﬁlm stars Zana Marjanovic and veteran character actor Rade Serbedzija, and was shot both in Bosnia and Hungary. Its dialogue is in English and Serbo-Croat, and release is scheduled for December 23.
Jolie presented the best actor award to Thomas Schubert, the star of Atman, which was named best ﬁlm. Ada Condeescu won best actress for Loverboy.
The ﬁrst Sarajevo Film Festival took place during the war, with residents gathering in a basement to watch Quentin Tarantino’s Pulp Fiction.