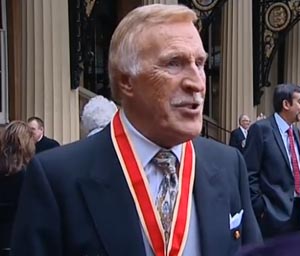 Bruce Forsyth, 83, has received his knighthood from HM the Queen at Buckingham Palace today.
The newly knighted Sir Bruce told media of his conversation with the Queen. When she remarked that he had been entertaining people for a long time, he told her that it was coming up to 70 years, beginning as a 14-year-old during World War II.
He also thanked media and the public for lobbying for his knighthood.
Forsyth got his break in 1958, when he hosted Sunday Night at the London Palladium. The original two-week stint lasted ﬁve years. Since then, he has become known for hosting various shows, principally The Generation Game, Play Your Cards Right and Strictly Come Dancing.
In the fashion world, designer Celia Birtwell, 70, received a CBE. She had designed prints for Ossie Clark in the 1960s, and the clothing had wound up worn by celebrities including the Beatles and Twiggy.
Birtwell has also released a book this year, called My Stylish Life, in which she looks back at her career.