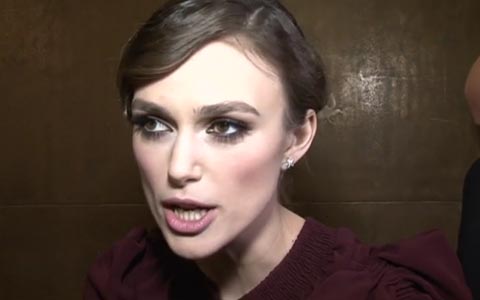 Keira Knightley’s question: do the British like spanking?
We already mentioned the sado-masochistic scenes in her new movie, A Dangerous Method, back in October. According to the actress, spanking was never mentioned after the original première, and only slightly at the Toronto Film Festival. But, now with A Dangerous Method having a gala première in London at the Mayfair Hotel yesterday, it’s being brought up regularly.
‘In England it’s got mentioned all the time. I don’t know what that says about us! We obviously like spanking, I don’t know!’ she said.
The period drama, directed by David Cronenberg and based on the book A Most Dangerous Method by John Kerr and a stage adaptation by Christopher Hampton (who also penned the script), deals with the birth of psychoanalysis and stars Viggo Mortensen as Sigmund Freud, with Vincent Cassel as Otto Gross.
Knightley wore Burberry to the première, accessorized by jewellery from Chanel, and Christian Louboutin heels.