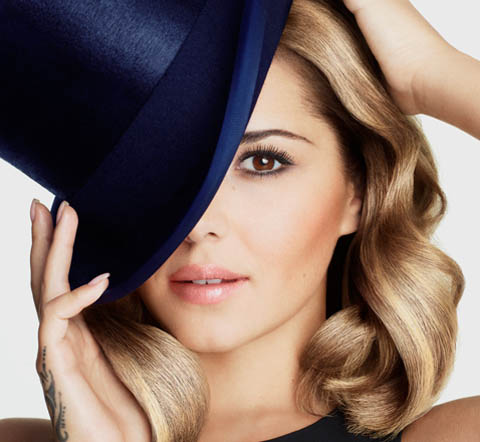 Our UK readers will have noticed a behind-the-scenes video featuring Britain’s sweetheart, Geordie songstress Cheryl Cole, running in the web edition of Lucire.
L’Oréal Paris’s False Lash Telescopic, which has sponsored this entry, gives a lengthening false lash effect, without, as Cheryl points out in the video below, needing the use of false eyelashes. ‘They’re all mine,’ she says.
She calls the product a must-have.
Since the focus isn’t on her hair in this campaign, we’re looking at her eyes which are, product or not, very noticeable to begin with.
The lengthening formula builds intensity, and we’ve discovered for ourselves that it works particularly well.
That intensity is what L’Oréal wants to convey: the doorways through which Cheryl walks are at a large scale, with size the main message.
The ﬁbreoptic set on day two of the shoot gives the message that a ﬁbre formula is used in False Lash Telescopic.
While the behind-the-scenes video focuses on her TV campaign, viewers will spot some of the moments when the print visuals were photographed.
Given Cheryl’s rising international proﬁle, we’ve often wondered why we don’t see her in more L’Oréal Paris promotions, especially outside the UK.
Alongside some of L’Oréal’s other spokeswomen, she gets noticed a great deal more in the news, and since signing up with the French cosmetics’ brand, she’s one of the most photographed women at the Festival de Cannes.
And given the way she grabs headlines, we expect to see more of her.