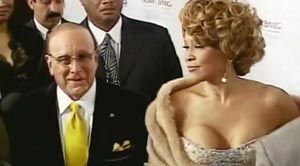 Footage of Whitney Houston’s last performance has appeared on YouTube, performing ‘Jesus Loves Me’ with Kelly Price. The singer sounded raspier than usual but fans were still delighted at the impromptu performance.
Meanwhile, further tributes have poured in for the late singer, who died yesterday aged 48 in her hotel room in the Beverly Hilton.
L. A. Reid, Ne-Yo, Toni Braxton and Ciara have added their tributes.
‘She was the greatest voice of all time,’ said Reid. ‘I actually thought it was a hoax. And when I found out it was the truth, it devastated me.’
‘Whitney was an icon. She came from a school where it was greatness or it just wasn’t,’ said Ne-Yo.
Braxton said, ‘I hope they remember her music and that incredible voice.’ Ciara called Houston a ‘legend and icon, for sure.’
Earlier tributes, reported in our previous article, included those from her godmother Aretha Franklin, Mariah Carey, who counts Houston as one of her inspirations, her mentor Clive Davis, and Sir Elton John.
There are rumours that Houston may have drowned in her own bath after taking prescription drugs, but they are so far unconﬁrmed by ofﬁcial sources.