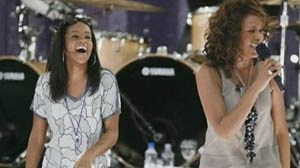 Oprah Winfrey has interviewed Whitney Houston’s brother, sister-in-law and daughter for a special commemorating the late singer airing this weekend on her own network.
In the video clip below, Patricia Houston was asked if she expected her sister-in-law would die an early death.
She replied, ‘The handwriting was kind of on the wall. I would be kidding myself to say otherwise.’
She added, ‘Things were really changing with her. It wasn’t about substance abuse or anything like that relative to the latter days or anything like that. It was just more of a lifestyle. I was afraid for other things.
‘I saw her chasing a dream, you know, looking for love in all the wrong places.’
Winfrey also speaks with Bobbi Kristina Brown, Whitney Houston and Bobby Brown’s 19-year-old daughter. She talks about her memories of her mother and how she would like her to be remembered.
Houston’s brother, Gary, is also interviewed.
The special of Oprah’s Next Chapter airs Sunday at 9 p.m. EDT.