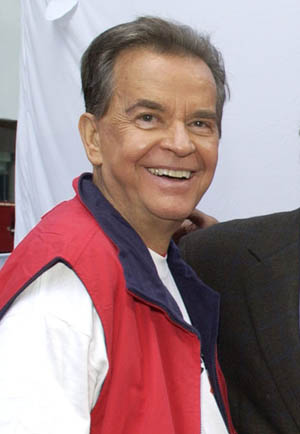 TV producer and host Dick Clark has died of a heart attack, aged 82, at St John’s Hospital in Santa Monica, Calif., says his spokesman Paul Shefrin.
Clark was best known for presenting the TV show American Bandstand from 1956 to 1989, which broke a number of new acts, and Dick Clark’s New Year’s Rockin’ Eve, which ran from 1972.
Clark hosted the latter even after suffering a stroke in 2004, which impaired his speech. He made his 40th appearance last year.
While a dance show, American Bandstand introduced Chuck Berry, Jerry Lee Lewis, Chubby Checker, Buddy Holly, Michael Jackson and Madonna to mainstream audiences, and paved the way for other series such as Soul Train. However, Clark did make one miss in identifying big acts for American Bandstand: the Beatles.
It has been credited with helping to break racial barriers in the US, as well as giving teenagers’ parents a glimpse into the music their children were interested in.
Dick Clark Productions, the firm he founded in 1957, became an influential company, producing, among its many shows, Where the Action Is, The $25,000 Pyramid, TV’s Bloopers and Practical Jokes, American Dreams, and the telecasts for the Golden Globes and the American Music Awards.
He was also a partner in the United Stations Radio Network.
Clark was born in Mt Vernon, NY, in 1929 and started his career in a Utica radio mailroom in 1945.
In 1951, Clark graduated from Syracuse University with a business administration degree. He went to work in radio soon afterwards and when his employer, WFIL, decided to branch out into television, Clark followed.
The show, Bob Horn’s Bandstand, saw Clark fill in, getting the permanent host role after Horn was arrested for drunk driving in 1956. The show was renamed American Bandstand and went national in 1957.
Clark was inducted into the Radio Hall of Fame in 1990, and the Rock and Roll Hall of Fame in 1993.
Clark sold Dick Clark Productions for US$137 million in 2001 but remained chairman and CEO.
He had been married three times, to Barbara Mallery from 1952 to 1961, to Loretta Martin from 1962 and 1971, and to Kari Wigton from 1977. He had three children by Mallery and Martin.