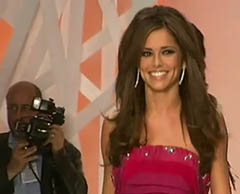 Cheryl Cole has managed to get herself in the news successfully of late, just prior to the release of her new single, ‘Call My Name’, which made its UK radio début yesterday.
The new single has been written and produced by Calvin Harris. Most agree that it’s catchy, though at least one reviewer felt it lacked personality. Readers can make their own judgement with the last video in this entry.
‘Call My Name’ will be released as a single on June 10, while the video appears on May 2. The forthcoming album from which the song comes is called A Million Lights.
The Cole rumour mill, meanwhile, has extended to ABC’s Modern Family, the Emmy Award-winning series starring Ed O’Neill.
ITN says that Cole will make a cameo appearance on the show, which is reportedly President Obama’s favourite, and does battle against Simon Cowell’s The X Factor US.
Lana del Rey, meanwhile, says that Cole is working on a song that she has written, and that the pair have so far only conversed via email.