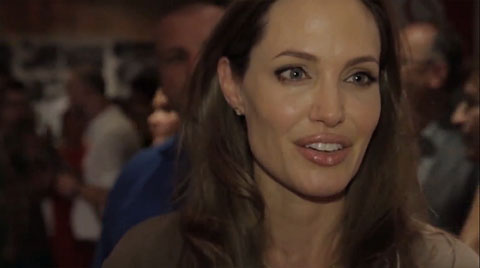 Angelina Jolie has débuted her engagement ring from Brad Pitt at the Sarajevo Film Festival on Saturday. While she didn’t make any comments about it, Jolie spoke of the Bosnian capital and the festival itself.
Jolie was made an honorary citizen of Sarajevo in recognition of her film, In the Land of Blood and Honey, a romance between a Bosnian Muslim and a Bosnian Serb during the 1990s’ war.
The film, Jolie’s directorial début, scored a Golden Globe nomination earlier this year, though it was criticized by some members of the Bosnian Serb community.
On stage, she said, ‘The time I spent and the people I met in Bosnia have changed me forever. I can’t tell you how much it means to me to be named an honorary citizen of Sarajevo, a city so dear to my heart.’
In a press interview afterward, Jolie added, ‘Brad and I said, the first time we came, as soon as we left, “That was the best festival we’ve ever been to,” because people are here to share. They’re here from all around from Yugoslavia, to listen to each other, to be together, to make art. It’s not just about film, it’s about what film means. It’s about sharing.’