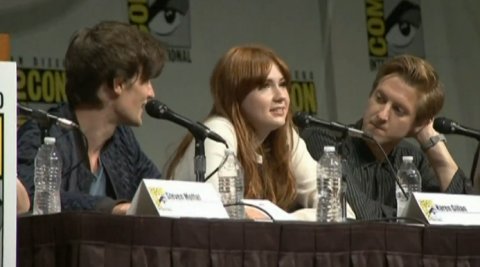 With the next season of Doctor Who commencing in September, the stars have gone to Comic-Con in San Diego, Calif. to promote the series to fans.
In the videos below, Matt Smith, Karen Gillan and Arthur Darvill talk about becoming close friends during the years they have worked together and filming their last scenes.
Gillan also talks about her departure and how, for two weeks, she could not stop crying ‘in between takes. Anything was setting me off … I couldn’t hold it together, I’ve got to be honest … I’ve made some of my best friends on this show.’
Fans of Sir Peter Jackson’s The Hobbit were also well served. Lucire has video segments from actors Sir Ian McKellen, Martin Freeman and Andy Serkis.
Sir Ian had no problem returning to the role of Gandalf for the prequel, while Freeman, as Bilbo Baggins, said it was easy to work with Serkis, who plays Gollum. Serkis had high praise for Sir Peter in the last video, calling him a great mentor.