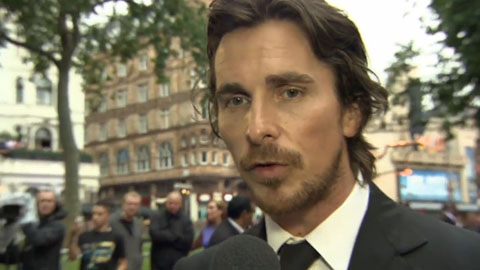 In his red-carpet interview, Welsh actor Christian Bale says he is flattered that the public has been interested in his interpretation of Batman in the trilogy directed by Christopher Nolan.
He admits there was scepticism when the first was made, but he has come to a point where he has become used to donning the Batman suit.
‘It symbolizes something very different … it’s been a real honour to play this role,’ says Bale. He views all three as a single movie, with a beginning, middle and, with The Dark Knight Rises, an end.
Director Christopher Nolan spoke of Bale’s dedication in portraying a ‘self-created superhero’ with ‘no superpowers, who just needs self-discipline and incredible focus.’ He says it is an ‘incredible thrill’ to see the finished product and is adamant that this is the end of his Batmans.
Anne Hathaway, who plays Catwoman, says she found her character with her hips. ‘I was trying to figure out how I was going to walk, and I found I wasn’t very comfortable with the slinkiness, so I found a choreographer and I worked with her for a few weeks to kind of work on the movement of the character.’
On her leading man, she says, ‘Christian created such a richly drawn character. There [are] so many opposing forces in him: all the rage and anger that he feels about the loss of his parents … but the altruistic streak in him that you just can’t shake, and … a character who is willing to what the rest of us are afraid to.’
Joseph Gordon-Levitt says the ending is well thought through and can be traced through the earlier movies, and that it is ‘a real ending’.
Tom Hardy, meanwhile, says he is not a method actor, and that he and Bale did not take themselves too seriously. ‘I’m really grateful to be a part of it … I really was happy to be here,’ he says of his role.
Morgan Freeman says he was ‘totally blown away by it,’ and promises moviegoers there will be surprises. He is not disappointed now the films have come to an end and believes he will work together with Nolan again, though not on Batman.
HRH Prince Harry was in attendance at the UK première of The Dark Knight Rises.