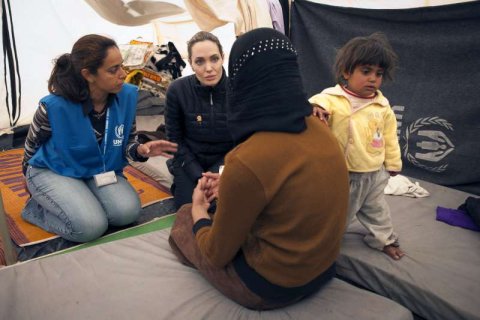 Above UNHCR Special Envoy Angelina Jolie meets with refugees at the Za’atri refugee camp in Jordan.

Actress Angelina Jolie, in her capacity as a UNHCR Special Envoy, visited Syrian refugees on the Jordan–Syria border. The refugees had made the dangerous crossing to Jordan from war-torn Syria.
One family which Jolie met recalled hiding in holes under the ground when the bombing became too severe in Syria. Unfortunately, after rain, the holes had become flooded. There is also a shortage of food, including bread. These factors had driven the desperate family to flee.
Jolie was at the camp earlier this week on her third visit, following up on an earlier visit in September.
‘What I saw last night is a dramatic example of the plight of hundreds of thousands of Syrians who have been uprooted by the fighting and are in a desperate search for safety,’ she said on Thursday.
‘Civilians inside the country are being targeted. Many of those trying to flee are exposed to extreme danger right up to the border itself. I appeal to all sides in the conflict to do all they can to ensure the safe passage of these innocent civilians.’
‘The incredible compassion shown to these traumatized refugee families by the Jordanian border guards tonight was extremely moving,’ she added. ‘Jordan has welcomed the refugees even though it has placed a huge burden on the country. The international community needs to show more solidarity and to support Jordan and the other countries in the region who continue to keep their borders open.’
Press reports estimate that some half a million refugees have fled. Between Jolie’s visits, the number of registered Syrian refugees has swelled by over 200,000. The Za’atri refugee camp north of Amman has doubled in size. UNHCR is currently racing against time to prepare the camps for the winter; temperatures are already dropping to freezing. Tents are being reinforced, and c. 30,000 high thermal blankets and winter clothing are being distributed.
Jolie and fiancé Brad Pitt have made a donation of $50,000 for family tents. However, she said, ‘Winter is already here and UNHCR and its partners still lack 50 per cent of the funds needed to get everyone through the next few difficult months.’