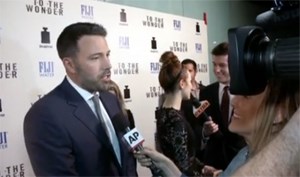 Rachel McAdams, Ben Affleck and Olga Kurylenko attended the Los Angeles première of their latest film, To the Wonder, directed by Terrence Malick, at the Pacific Design Center.
Kurylenko was not the only Bond alum in the film: Spanish actor Javier Bardem also stars.
McAdams, Affleck and Kurylenko had nothing but praise for Malick. McAdams speaks of Malick’s ability to appreciate beauty; Affleck says he learned from Malick as a director; while Kurylenko talks of his story-telling.
McAdams wore a black lace Maria Lucia Hohan dress, while Kurylenko wore a Christian Dior dress and Manolo Blahnik sandals.
The movie is about a married couple, played by Affleck and Kurylenko, finding problems with their relationship. Affleck then encounters an old flame, played by McAdams. Bardem plays a local disillusioned priest. Early reviews indicate it will appeal to many of Malick’s fans.
The film has already been shown at Venezia and Toronto.