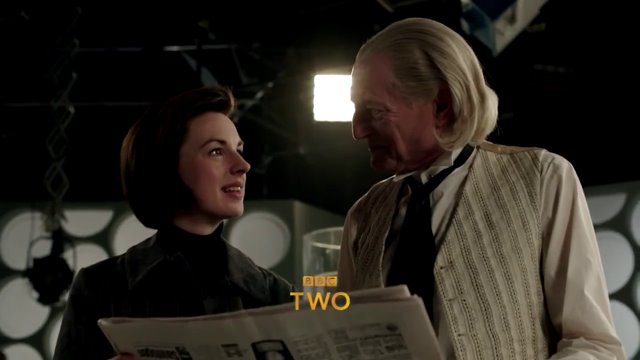 Building on the Doctor Who 50th anniversary celebrations is a fact-based drama on BBC2, An Adventure in Space and Time, written by Mark Gatiss. The trailer was released today by the BBC.
The film looks at the creation of Doctor Who, and the involvement of producer Verity Lambert, director Waris Hussein, actor William Hartnell, and BBC head of drama Sydney Newman, at the dawn of the 1960s.
The trailer shows a convincing re-creation of the 1960s, including the fashions. Hussein and others had reportedly had a close involvement with the drama.
Actor David Bradley portrays Hartnell, and has a very convincing likeness to the actor. Jessica Raine plays Lambert, Sacha Dhawan plays Hussein, and Brian Cox portrays Newman. Terry McDonough directs the drama, and Matt Strevens produces.
The description at the doctorwho.tv site reads, ‘This special one-off drama travels back to 1963 to chart the origins of Doctor Who. Actor William Hartnell felt trapped by a succession of hard-man roles. Wannabe producer Verity Lambert was frustrated by the TV industry’s glass ceiling. Allied with a team of unusual but brilliant people, they went on to create the longest running science fiction series ever.’
The special débuts on November 21 in the UK, and November 22 in the US. November 23, the 50th anniversary of the first broadcast, sees a movie-length episode of Doctor Who on BBC One, simulcast to select international markets.
A prequel to the anniversary episode débuted online yesterday, with the surprise appearance of Paul McGann as the Eighth Doctor.