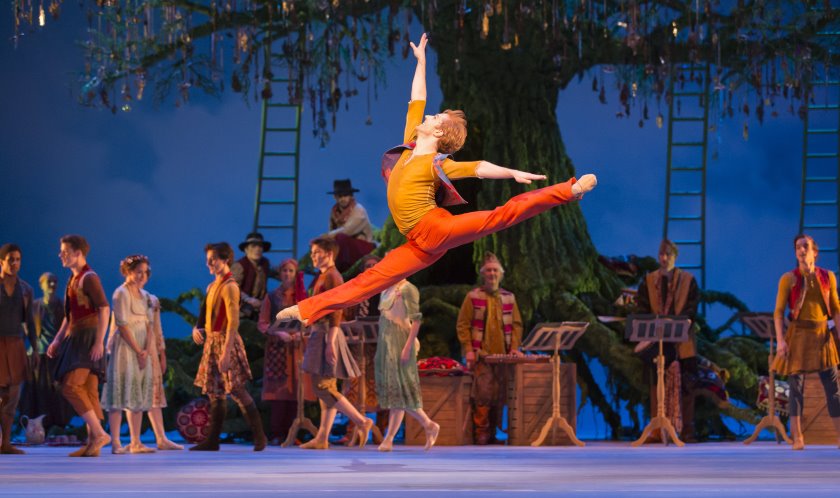 Above Steven McRae as Florizel in Christopher Wheeldon’s The Winter’s Tale, which will be revived for the Royal Ballet’s 2015–16 season. Photograph copyright ©2014 by Johan Persson. 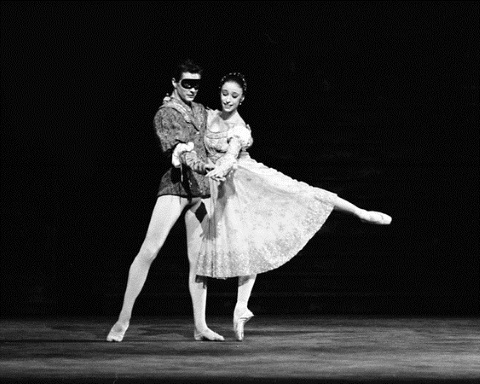 The Royal Ballet has announced its 2015–16 season under its director, Kevin O’Hare, with four world premières, including the first main-stage, full-length narrative ballet by artist-in-residence Liam Scarlett based on Mary Shelley’s Frankenstein; new one-act ballets from resident choreographer Wayne McGregor and artistic associate Christopher Wheeldon; and a new production of Carmen by principal guest artist Carlos Acosta.
The first production of the season is Kenneth MacMillan’s production of Romeo and Juliet, originally created in 1965 for Lynn Seymour and Christopher Gable, and performed by Margot Fonteyn and Rudolf Nureyev at its première, which famously met with 43 curtain calls. It is the first work in the Royal Opera House Live Cinema Season for 2015–16.
Acosta’s new adaptation of Carmen is set to the Bizet score with a new arrangement by Martin Yates. Acosta will dance the Don José and Escamillo roles at certain performances. Tim Hatley is behind the set and costume designs, and Peter Mumford has created the lighting. Scarlett’s Viscera, Jerome Robbins’ Afternoon of a Faun and George Balanchine’s Tchaikovsky pas de deux form the rest of the mixed programme, and part of the ROH Live Cinema Season.
McGregor’s Raven Girl will be revived in October in a double bill with Alastair Marriott’s Connectome. In May 2016, McGregor premières a one-act ballet set to Nyx, a one-movement orchestral work by Esa-Pekka Salonen. The programme also features a revival of MacMillan’s The Invitation.
In February 2016, the company premières a new ballet by Wheeldon set to a commissioned score by Mark-Antony Turnage, alongside a mixed programme featuring After the Rain and Within the Golden Hour. Designs are by Bob Crowley and lighting by Natasha Chivers.
Wheeldon’s The Winter’s Tale will stage its first revival in April 2016. The original was nominated for an Olivier Award for Outstanding Achievement in Dance and won the Critics’ Circle Award for Best Classical Choreography. It has also been nominated for a South Bank Sky Arts Award for Dance.
Scarlett’s full-length narrative ballet based on Frankenstein premières in May 2016, with a score by Lowell Liebermann with designs by John Macfarlane and lighting by David Finn. It will be broadcast live to cinemas on May 18, 2016.
Mixed programmes of Frederick Ashton’s work will feature this season, the first being The Two Pigeons, created in 1961 for Lynn Seymour and Christopher Gable, appearing in November 2014, alongside Monotones I and II, set to Erik Satie’s Trois Gnossiennes and Trois Gymnopédies. It returns in January 2016 in a second double-bill alongside Rhapsody, created by Ashton for Lesley Collier and Mikhail Baryshnikov in honour of the Queen Mother on the occasion of her 80th birthday. It will be shown in cinemas on January 26, 2015.
Peter Wright’s production of The Nutcracker, with design by Julia Trevelyan Oman, will be the Royal Ballet’s Christmas programme, while Wright’s Giselle returns in February.
A summer tour to Japan is planned for 2016.
As part of the Royal Ballet’s Linbury Studio Theatre programme, the Royal New Zealand Ballet is set to tour in the UK in November 2015, making its Royal Opera House début, performing a mixed programme, including a world première by Andrew Simmons. UK audiences will be delighted to see Anatomy of a Passing Cloud by Javier de Frutos, Selon Désir by Andonis Foniadakis, and Passchendaele by Neil Ieremia.
Others to be hosted include Cas Public, which also makes a début at Linbury, presenting Symphonie Dramatique, inspired by Romeo and Juliet, and coinciding with the Royal Ballet’s production of Romeo and Juliet on the main stage.
The Phoenix Dance Theatre will perform Until.With/Out.Enough, choreographed by Itzik Galili, a co-commission by the Royal Ballet. The company’s artistic director Sharon Watson will present TearFall in collaboration with the Wellcome Trust, exploring the complexities of crying, and Caroline Finn’s Bloom examines ‘a surreal universe with tragi-comic characters.’
Former Royal Ballet and American Ballet Theatre principal Alessandra Ferri will make her Linbury début in Chéri, directed and choreographed by Martha Clarke, and inspired by the novella by Colette. Chéri will feature American Ballet Theatre principal Herman Cornejo.
Will Tuckett’s Elizabeth will make its Linbury début, based on the life of Queen Elizabeth I, and featuring Carlos Acosta and Zenaida Yanowsky, set to a score by Martin Yates, derived from Elizabethan compositions by Dowland, Tallis and Morley.
Keon Kessels succeeds Barry Wordsworth as music director; Wordsworth becomes principal guest conductor.
Further information can be found at the Royal Opera House’s website at www.roh.org.uk.