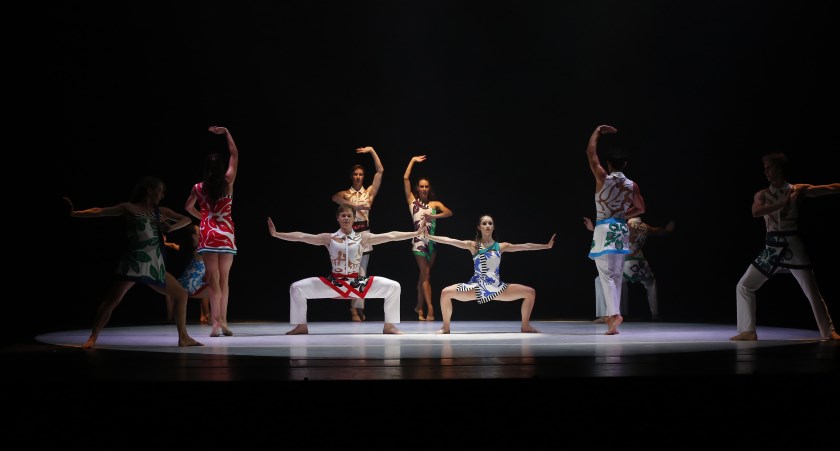 Javier de Frutos, the choreographer for The Anatomy of a Passing Cloud, which was commissioned by the Royal New Zealand Ballet in 2013, has been nominated for an Olivier Award for Outstanding Achievement in Dance.
The Anatomy of a Passing Cloud explores ‘New Zealand’s relation to its physical location and its very identity as a Pacific nation,’ de Frutos said in 2013.
‘I have taken Pacific influences that I like: inspirations, sounds, shapes, styles, and reworked them. Obviously the Pacific is not my home as it is yours but I feel that as a guest you can own the love of something and I love this part of the world.’
The work premièred in New Zealand in 2013, and was performed by the RNZB at the Linbury Studio Theatre at London’s Royal Opera House in November 2015 as part of a mixed programme.
‘We’re delighted that Javier de Frutos has been nominated for an Olivier Award for this stunning work which holds a special place in our repertoire,’ said Francesco Ventriglia, RNZB artistic director. ‘Javier is part of the extended RNZB family, having first created Milagros … in 2003.’
This year’s nominations include luminaries such as Kenneth Branagh, Kenneth Cranham, Benedict Cumberbatch, Adrian Lester and Mark Rylance for Best Actor; Gemma Arterton, Denise Gough, Nicole Kidman, Janet McTeer and Lia Williams for Best Actress.
Dame Judi Dench, Michele Dotrice, Melody Grove and Catherine Steadman are the Best Supporting Actress nominees, while Mark Gatiss, Michael Pennington, David Suchet and Tom Sturridge vie for Best Supporting Actor.
Best Director nominations went to Jonathan Kent for Gypsy at Savoy Theatre; Matthew Dunster for Hangmen at Jerwood Theatre Downstairs at Royal Court & Wyndham’s Theatre; Rob Ashford and Kenneth Branagh for The Winter’s Tale at Garrick Theatre; and Robert Icke for Oresteia at Almeida Theatre.
Virgin Atlantic Best New Play Award nominees are Farinelli and the King, Hangmen, People, Places And Things, and The Father.
Among the musical nominations, David Bedella, Dan Burton, Peter Davison and Gavin Spokes compete for Best Supporting Actor, while Preeya Kalidas, Amy Lennox, Lara Pulver and Emma Williams seek the Best Supporting Actress award.
Ian Bartholomew, Killian Donnelly, David Haig, Matt Henry and Jamie Parker are competing for Best Actor; Tracie Bennett, Natalie Dew, Laura Pitt-Pulford, Imelda Staunton and Sophie Thompson for Best Actress.
Bend It Like Beckham, In the Heights, Kinky Boots and Mrs Henderson Presents are up for the Mastercard Best New Musical Award.
Best New Dance Production nominees are He Who Falls, by Compagnie Yoann Bourgeois, Roméo et Juliette by les Ballets de Monte Carlo and Woolf Works by the Royal Ballet.
De Frutos will compete with Alessandra Ferri for her performances in Woolf Works and Chéri, and Sasha Waltz for her choreography of Sacre at Sadler’s Wells.
The public can vote for the Magic Radio Audience Award at www.olivierawards.com until March 11, 12 p.m.
The Olivier Awards 2016 will be announced at the Royal Opera House on April 3. Public tickets became available for Mastercard members at www.priceless.com/London.