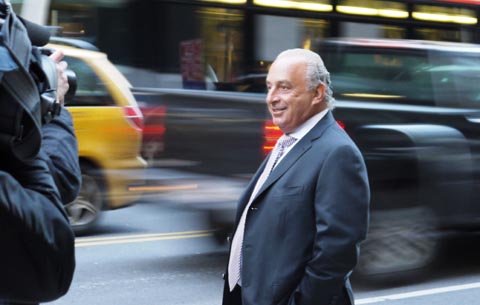 As Topshop opens its doors in Wellington today, its second store in New Zealand, and in the wake of an announcement of a new flagship store in Dublin, Sir Philip Green, who chairs its parent Arcadia Group, has been under assault by British politicians.
The most recent controversy surrounds Sir Philip’s knighthood, which was awarded to him for services to retail. However, a damning report published in July 2016 concluded that British Home Stores, which had been bought by Sir Philip in 2000 for £200 million and was formerly part of Arcadia, had been plundered, leaving BHS on life support. The mood in the Commons in October was that Sir Philip should be stripped of his knighthood, passing the amendment, ‘[This House] noting that Philip Green received his knighthood for his services for the retail industry, believes his actions raise the question of whether he should be allowed to continue to be a holder of the honour and calls on the honours forfeiture committee to recommend his knighthood be cancelled and annulled.’
None of Sir Philip’s supporters were present at the debate, where MPs launched into attacks on the multi-millionaire whilst under parliamentary privilege.
Also ignored as attacks were launched against Sir Philip was that, for a considerable period between 2000 and 2015, BHS employed thousands and the British establishment fêted the businessman. There were talks of a business venture with Simon Cowell, involving Cheryl Cole; supermodel Kate Moss created a line sold through Topshop. Even in the US, Sir Philip enjoyed a glowing reputation, winning a National Retail Federation’s Retailer of the Year Award. Between 2002 and 2009 BHS had paid £167 million of corporation tax, and capital expenditure had been £421 million while it was under Sir Philip’s control, according to Taveta Investments, his holding company. However, The Guardian believes that £580 million in dividends, rents and interest had been extracted by the Green family.
While the motion does not mean Sir Philip will lose his knighthood, it will be difficult for the honours’ forfeiture committee, which considers the matter, to ignore.
Sir Philip sold BHS for £1 in 2015 to investors led by Dominic Chappell—someone whom he now considers to be ‘categorically’ the wrong buyer; by April 2016 it had gone into administration, with the loss of 11,000 jobs and a £571 million pension scheme deficit. Sixteen years before the fund had been in a £5 million surplus.
By July, the work and pensions’ select committee and the business, innovation and skills (BIS) committee issued a report which placed the blame of BHS’s collapse at Sir Philip’s feet. They accused him and others of extracting hundreds of millions of pounds from BHS, enriching himself and his family, and that he showed little business acumen. The committees further labelled the ‘systematic plunder’ of BHS ‘the unacceptable face of capitalism’, a term once linked to the Lonrho conglomerate in the 1970s and its chief executive Tiny Rowland. The committees also concluded that Sir Philip failed to invest in the business and that he was ultimately responsible for the pension fund’s deficit.
BHS’s overseas franchises and its website were sold to Al Mana Group, under which they have thrived.
Earlier in October, it is believed that Prime Minister Theresa May’s reference at the Conservative Party conference to business people who ‘take out massive dividends while knowing that the company pension is about to go bust’ was about Sir Philip.
The man who chaired the work and pensions’ committee, the Rt Hon Frank Field MP, launched into a further attack on Sir Philip on Channel 4 News on October 18, forcing Taveta to counter the statements. Field said that Sir Philip was now running Arcadia ‘into the ground like BHS,’ and warned that Arcadia staff should be concerned for their pension fund.
The same week, Sir Philip pledged to find a solution to the pension deficit in an interview with ITV and was ‘very sorry’ for those affected by the collapse. He claimed that he was in discussions with the Pensions’ Regulator to find a solution, though the Regulator stated that it was yet to receive a ‘comprehensive and credible’ proposal.
On ITV, Sir Philip defended the years during which a dividend was taken out, stating that BHS was profitable at the time, though the committees concluded that those profits were made by cost-cutting and squeezing suppliers. He believes that the support he and his company gave to BHS from 2005 was closer to £850 million.
Chappell, meanwhile, facing criticisms from Sir Philip, supported the stripping of Sir Philip’s knighthood.
There is an ongoing investigation into the failure by the Insolvency Service while the Serious Fraud Office has begun looking into the matter.