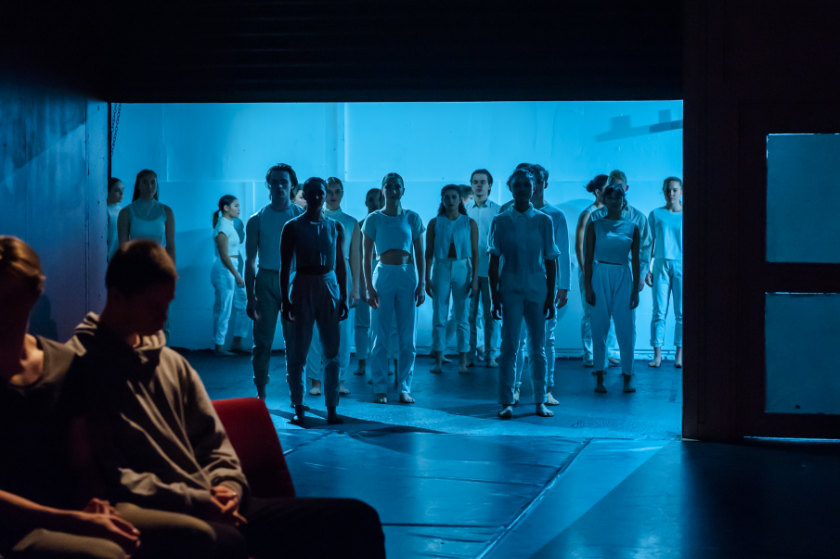 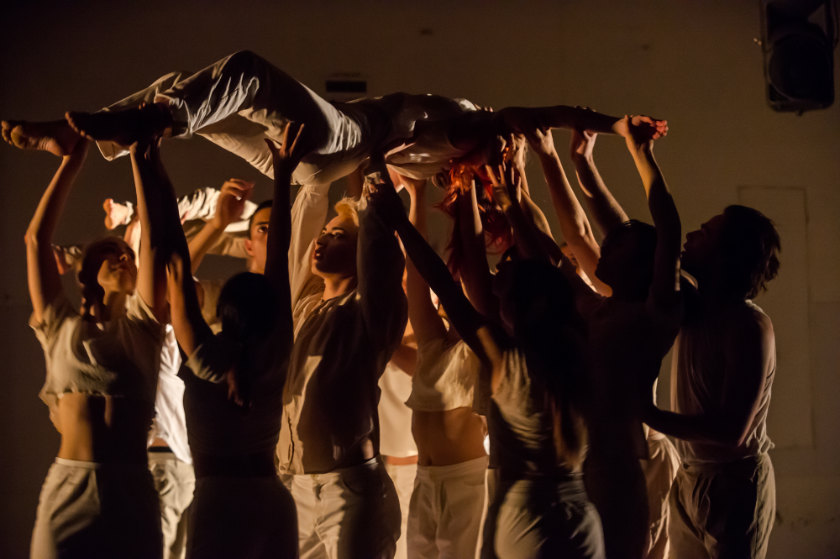 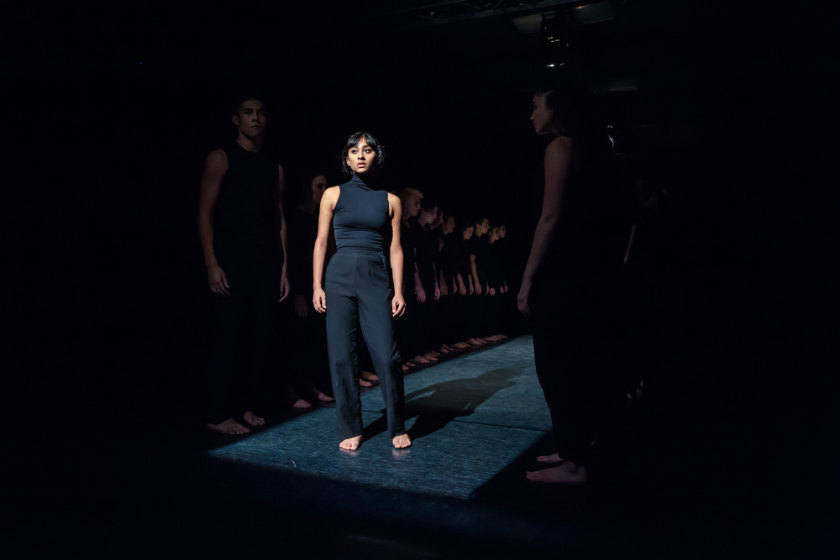 Above, from top: The entrance. Jack Jenkins’ Continuity in Disruption, with the second- and third-year contemporary dance students. Nadiyah Akbar in Sebastian Gittings’ Phyllis.

The New Zealand School of Dance’s Choreographic Season, which sees its students create their own choreography in collaboration with composer and sound designer Te Aihe Butler, is again a must-see for those who enjoy inventive, contemporary dance. Each time we head to this event there’s a new take from the students, and Stoa, the name of this season, taken from the Greek word στοά, for portico or gallery, is no exception.
Running till July 7, Stoa, representing an exploration of deeper thoughts, sees the audience escorted to the basement spaces at Te Whaea, the National Dance and Drama Centre. This was the students’ initiative, taking the Choreographic Season’s dances out of the traditional theatre venue. The first space, with its four pillars used imaginatively as part of several dances, works very well, both for the dancers’ performances and the acoustics.
Dressed in white, year two and three students kicked off proceedings, advancing slowly on stage. Glow, choreographed by Ngaere Jenkins and Laifa Ta’ala, and 平衡—Balanced Ping Heng, choreographed by Jareen Wee, were both positive dance statements. Glow opened with a touching waiata solo, before all the dancers joined in as the life force of the story expanded. Balanced, in telling its story of dualities, was particularly entertaining, with its coordination between the large groups of dancers and graceful, yet purposeful, movements. It concluded with the dancers "fading" into the white walls, the sign here that one dance had finished and another was about to begin.
Jack Jenkins’ Continuity in Disruption was characterized by mass and rapid movements of the dancers. We observed two separate groups, one with flowing movements, the other with jarring ones, perhaps representing the conflict between nature and outside forces (the story is about recovery after a bush fire); but, overall, Jenkins successfully told a story about rebuilding and community in one of the more positive themes of the evening. Beam, choreographed by Kia Jewell, featured a smaller group of eight, incorporating the pillars into the routine as though they were energy sources; Lachlan Broughton’s Fallout told a story about fighting conformity, concluding powerfully with the year two and three dancers clamouring for the light at the top of one beam (think of the film adaptation of World War Z and the zombies attempting to scale a wall), only for the light from Act II to beckon gently through flashes.
A brief intermission followed before we were escorted to the second space, not dissimilar from the first with its own support pillars. The dancers had changed into black for Altering Direction Harnessing Distraction, choreographed by Chris Clegg, another large, moving ensemble piece about the uniqueness of each person’s experience, to kick off the second act. Phyllis, by Sebastian Geilings, centred on one woman’s tumultous relationship, in what was the evening’s most visceral dance. Both Akbar and Riley Fitzgerald had some aggressive moves toward each other, and it was deeply emotional as a work; Tim Hecker’s ‘Virginal II’ track was the perfect accompaniment.
Olivia Foley’s Rev powerfully explored themes of renewal, while Understanding Now, choreographed by Braedyn Humphries, told a story of society’s tendency to distance itself from nonconformity—until, invariably, it wakes up to the fact that that voice was right all along. Humphries’ “trapped” dancer doesn’t avenge the one who imprisoned him (represented by tape on the floor), instead removing it to set all free. Alanna Main’s Cleanse explored assimilation, and had themes of liberation and newfound perception. The finalé, Neidan, featured 12 dancers in more revealing outfits, in keeping with choreographer Samuel Gilovitz’s more raw, purer dance exploring the power of introspection.
This was a deeply thoughtful series, with only a few words uttered in the whole programme, each dance inquiring into different emotions. It was distinct from earlier Choreographic Seasons, and will delight all fans of contemporary dance. The executions are professional, and the basement seating made the production seem more personal and powerful to the audience. The NZSD is on a high with this programme, and we can’t wait to see how well the students perform at their next show. Bookings are available at www.nzschoolofdance.ac.nz/events/stoa-choreographic-season-2018.—Jack Yan, Publisher 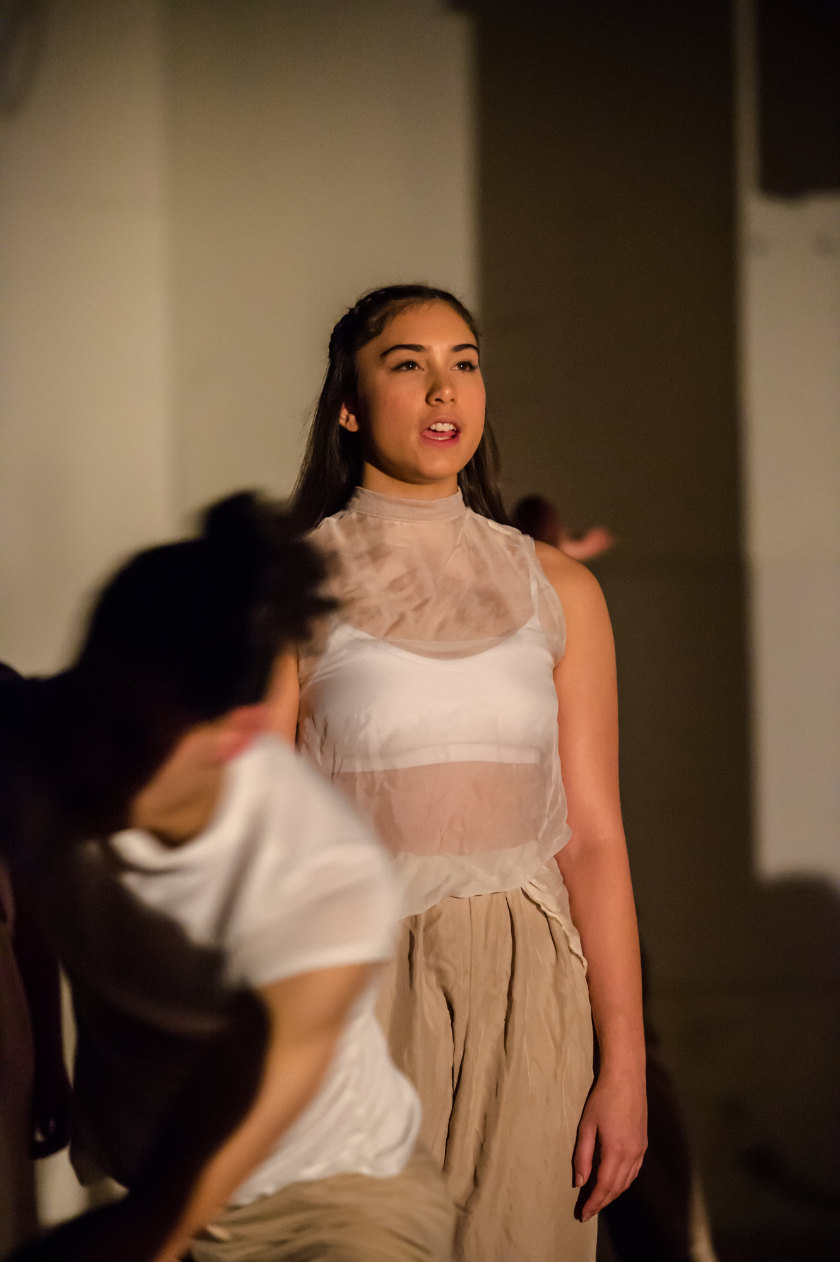 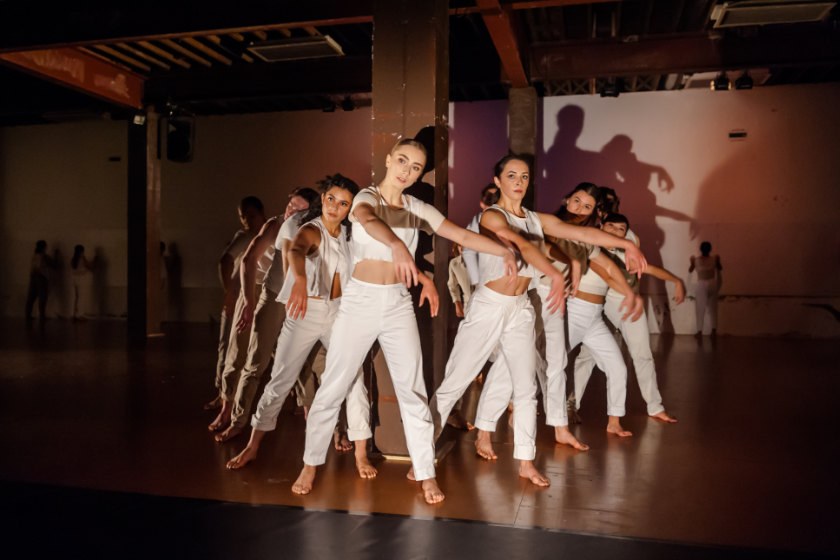 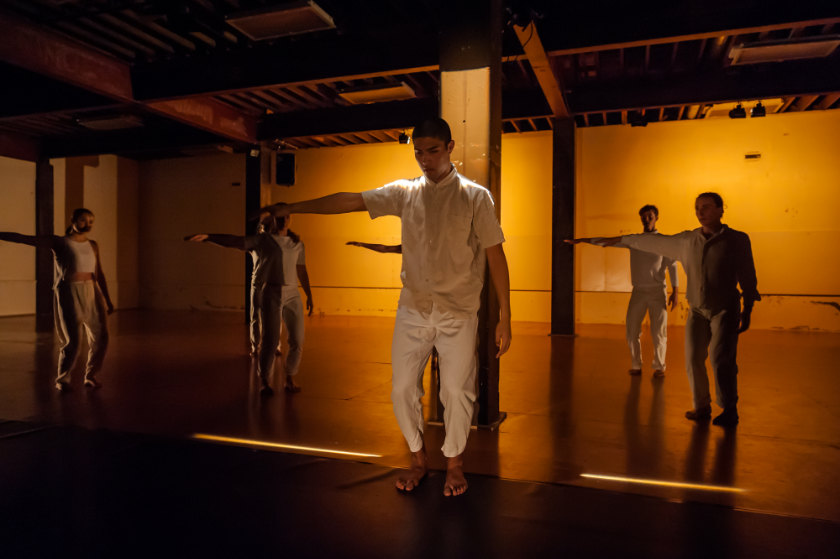 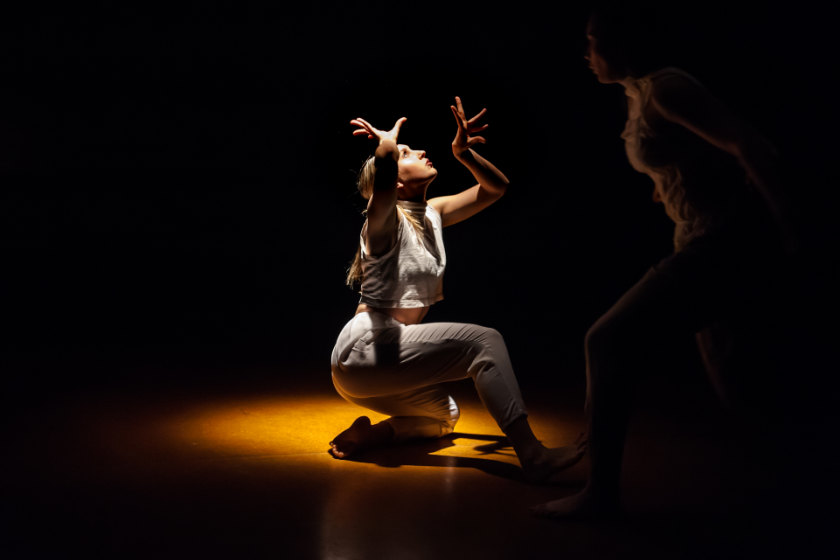 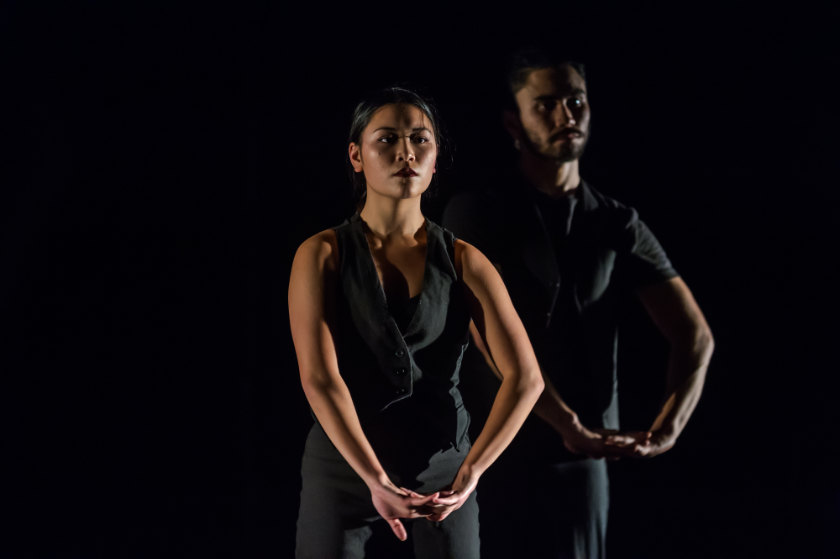 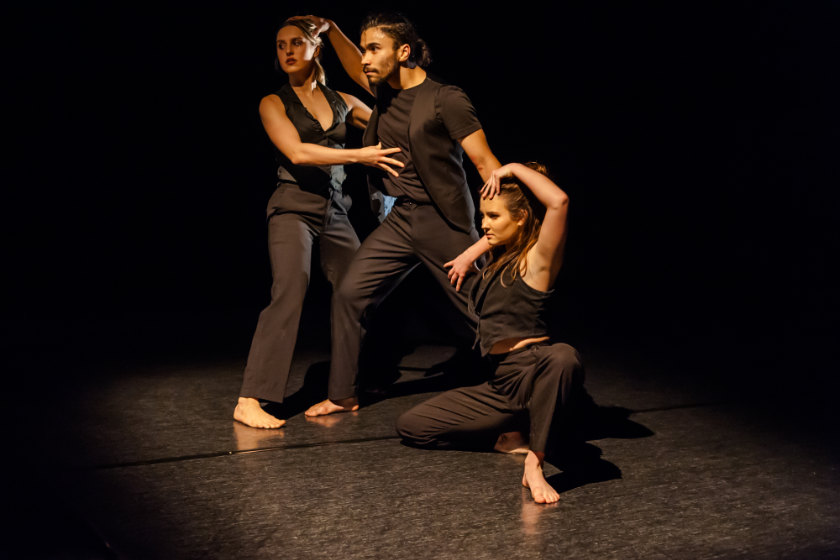 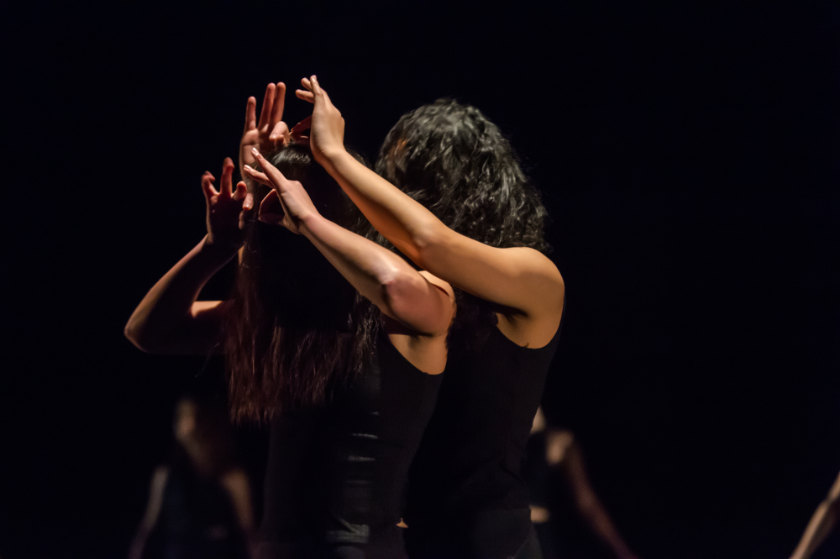 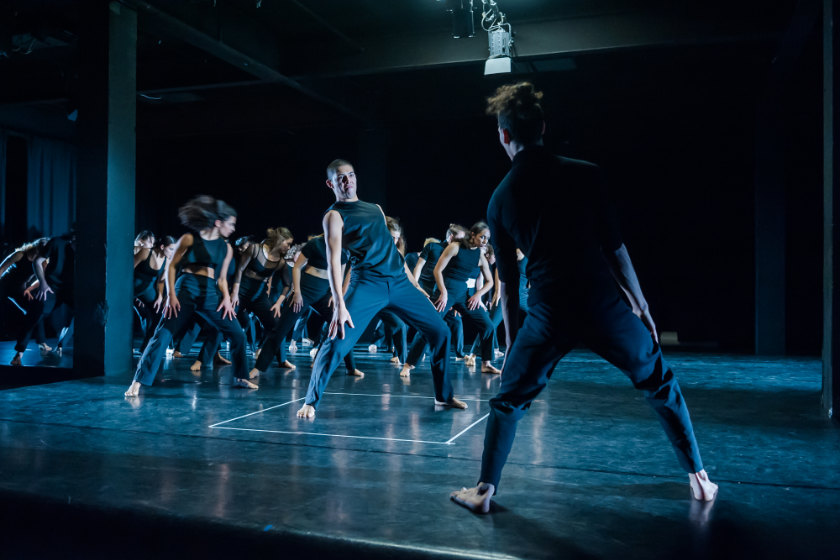 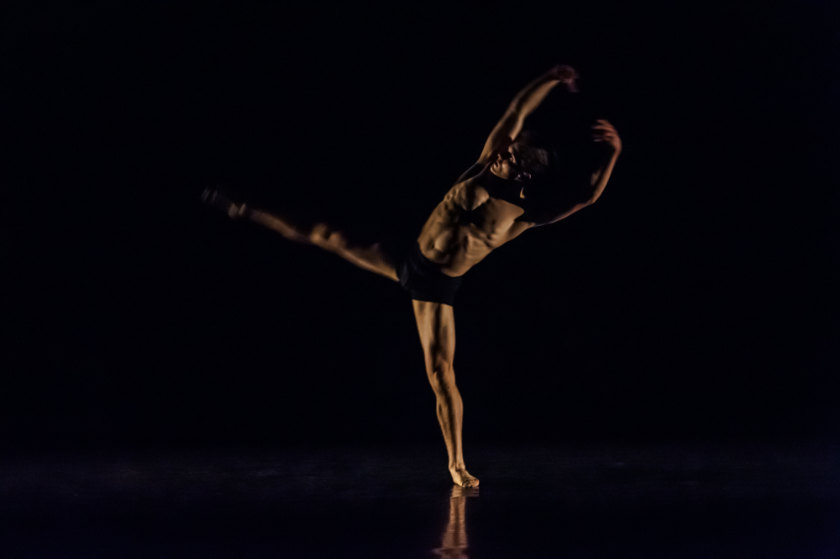