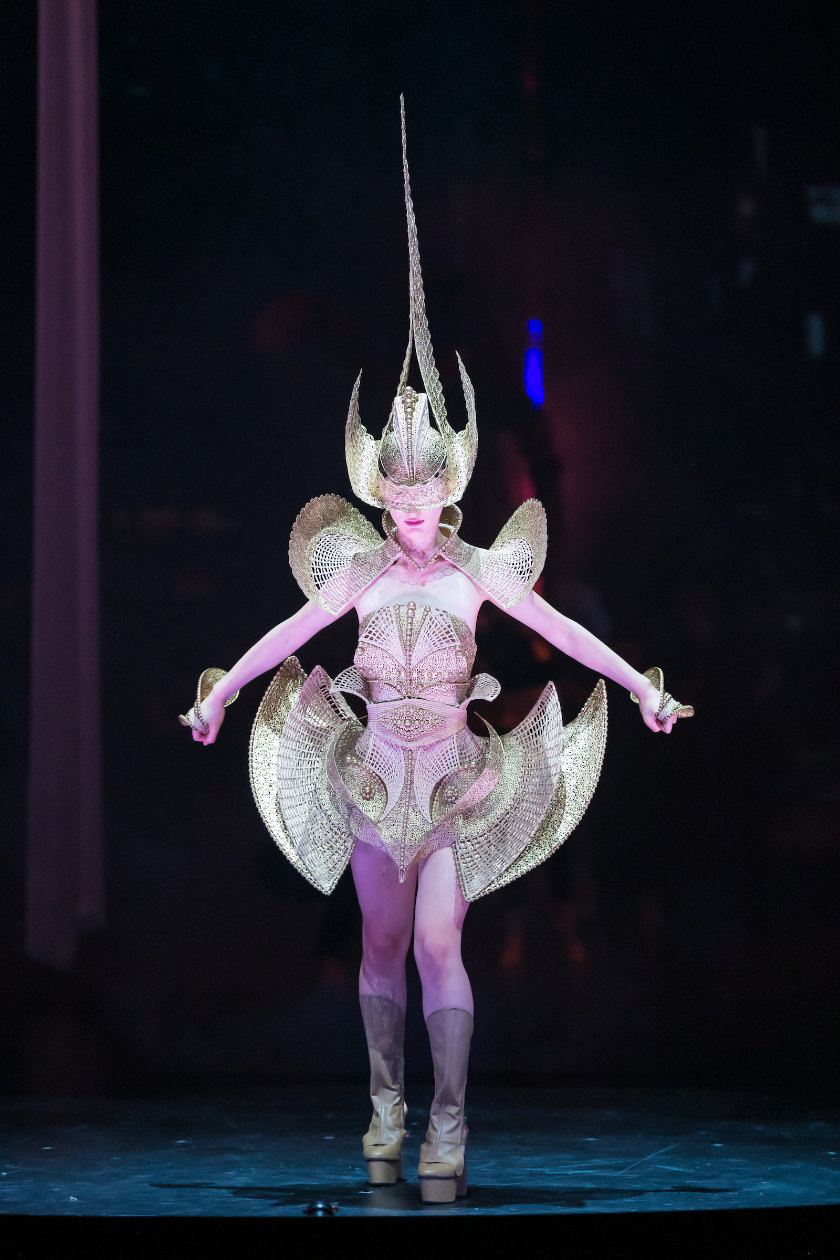 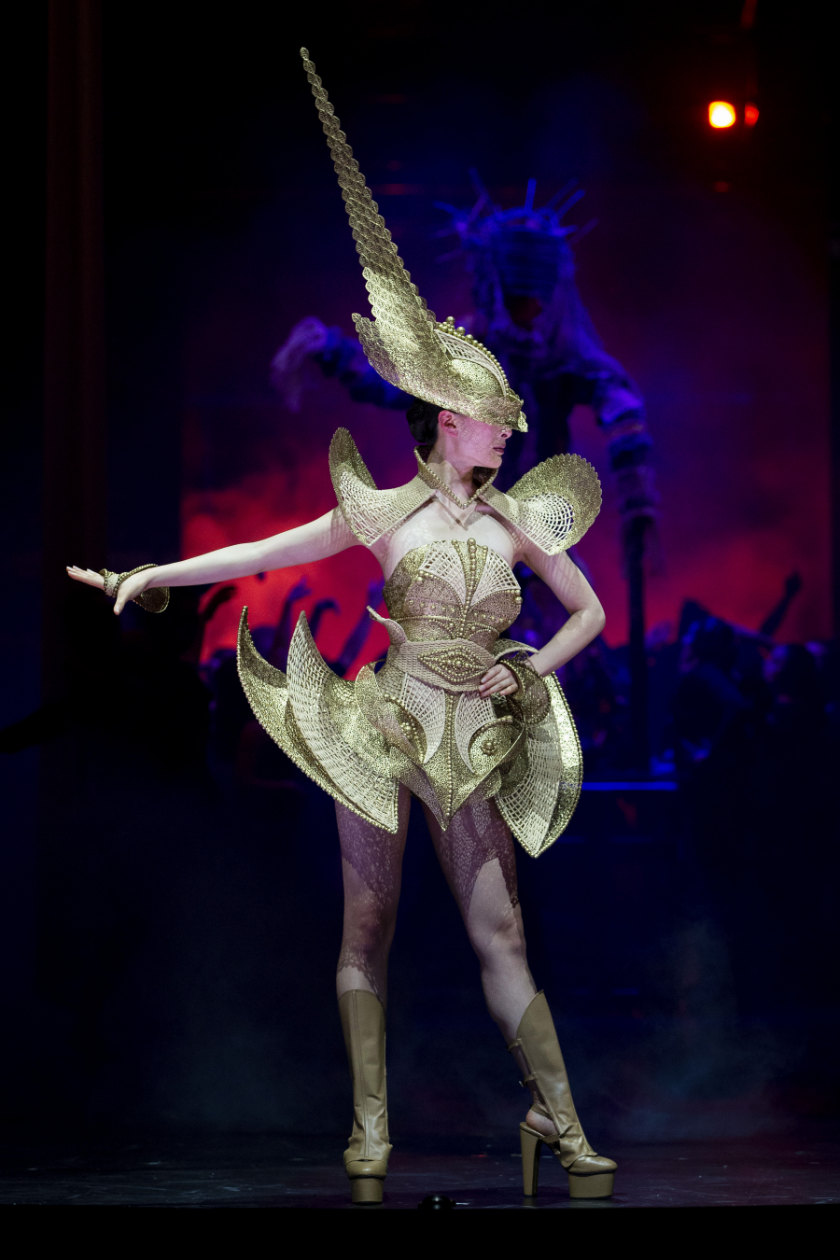 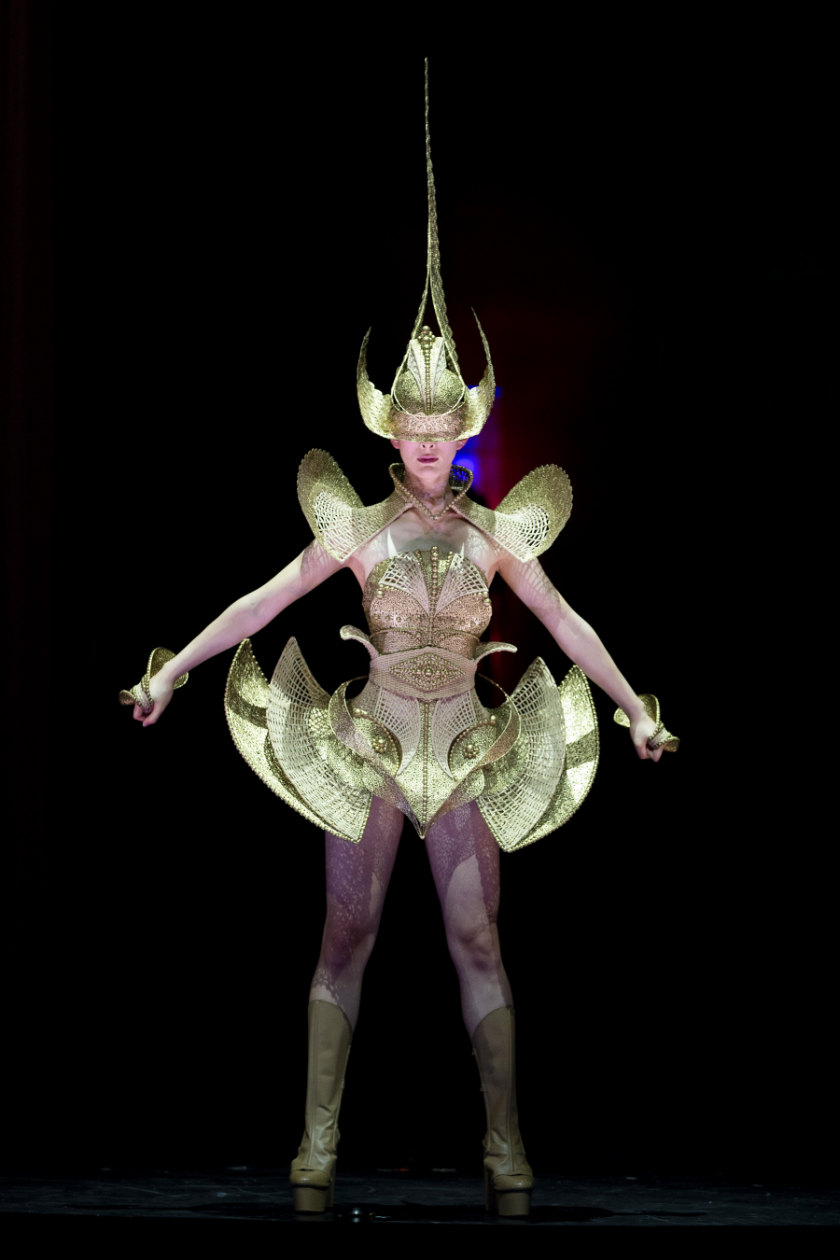 Above: Rinaldy Yunardi’s The Lady Warrior nets the designer his second Supreme Award at WOW.

Indonesian designer Rinaldy Yunardi becomes the third person—after last year’s sisters Natasha English and Tatyanna Meharry—to win the Supreme Award at the World of Wearable Art awards (WOW) in Wellington tonight.
In the 32-year history of WOW, only Yunardi, English and Meharry have managed to take top honours twice.
The Jakarta-based designer’s entry, The Lady Warrior, is a tribute to women, ‘the toughest warrior of all,’ according to a statement released by WOW. ‘The Lady Warrior plays the role of daughter, wife and mother. She is about inner strength rather than brute physical strength.’
Yunardi adds, ‘I used various mediums of materials to represent different elements of The Lady Warrior. Recycled paper made into rope and woven tightly together represents humanity and inner strength built from her experiences—she was born vulnerable but with life experiences she has strengthened and become strong.’
The Lady Warrior also won the Avant-garde section and the International Design Award: Asia.
WOW founder and resident judge Dame Suzie Moncrieff says The Lady Warrior is ‘a garment that the judges described as an extraordinary metamorphosis of a fragile organic material into something so beautiful. Demonstrating perfect balance and form, as well as immaculate craftsmanship, The Lady Warrior conveys a stunning fragility which is perfectly balanced with a subtle strength. The judges particularly loved the use of traditional weaving to create a piece that is so contemporary.’

Second place went to Woven In-tent by Queensland designer Kirsten Fletcher, whose entry also won the Residency Experience award and the International Design Award for Australia and the Pacific. Fletcher’s entry placed second in the Avant-garde section.
Yunardi had previously won for his inventive Encapsulate in 2017.
Woven In-tent was made using 500 abandoned tents, and highlights how tents are often abandoned after music festivals. Fletcher noticed this after attending Glastonbury eight years ago, and began collecting tents from festivals. The tent fabric’s ‘ability to crease meant I could cut the tent fabric into strips and create pleated strands to re-weave the fabric into something with new depth and texture. This once abandoned and discarded material suddenly became something with a beautiful lustre and a new life. Our fast fashion culture is setting a dangerous precedent to disregard and undervalue materials and resources. Sadly, this story isn’t new, but it needs to be retold over and over again before we realise the implications of our decisions,’ says Fletcher.
Joining Dame Suzie on the judging panel were fashion designer James Dobson of Jimmy D, and multimedia sculptor Gregor Kregar. Additional awards were judged by Sir Richard Taylor, creative director of Weta Workshop, B. Åkerlund, fashion activist and co-founder of the Residency Experience, and Melissa Thompson, Cirque du Soleil Creative Intelligence Team lead and conceptrice.
This year, designers from 43 countries and regions entered, and 115 finalist designers were presented with six themes. Three are recurring (Aotearoa, Avant-garde, and Open) and three are new (Mythology, Transform and White).
Some 60,000 are expected to attend the WOW show at the TSB Arena in Wellington from September 26 to October 13. Tickets and more information are available at worldofwearableart.com. 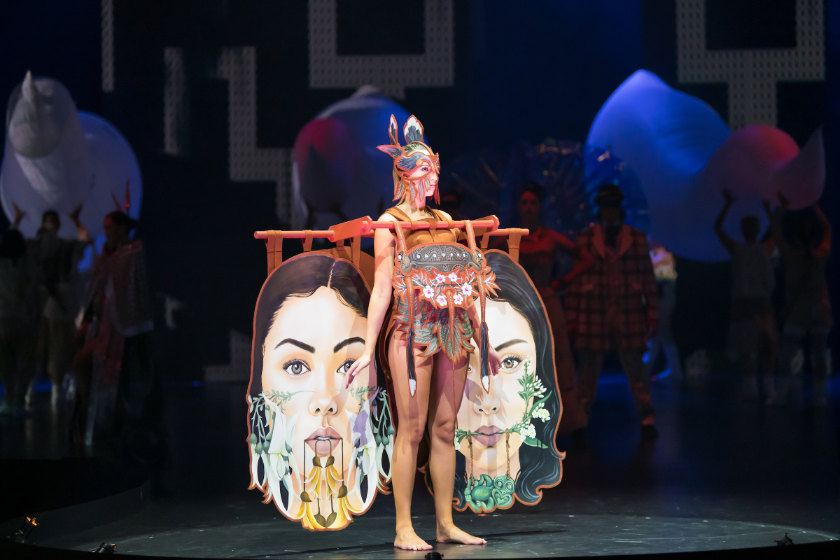 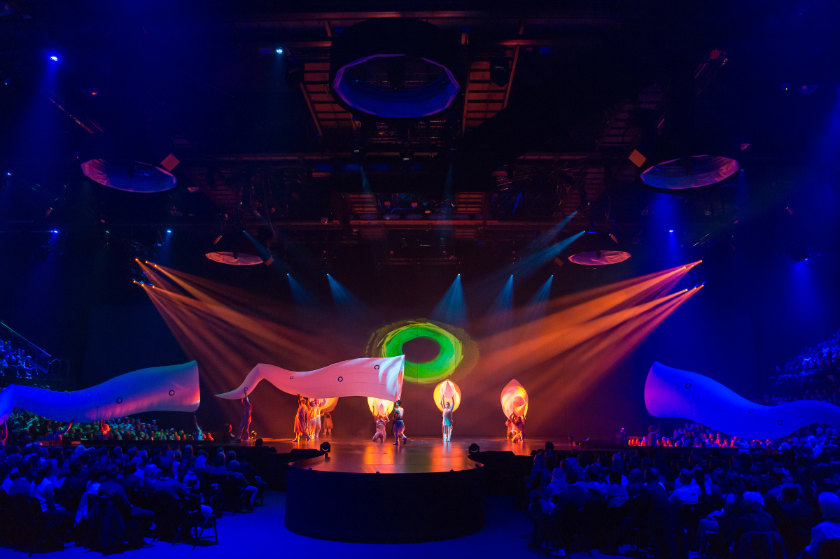 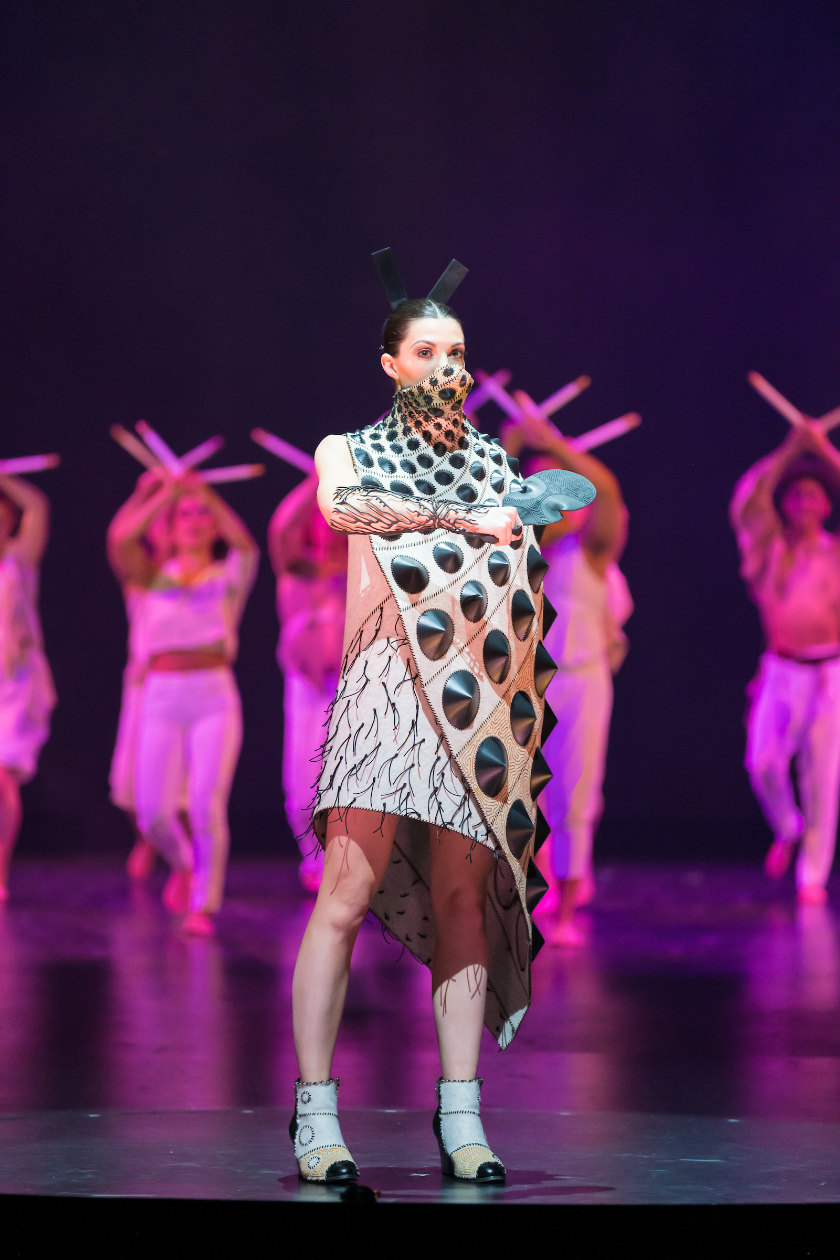 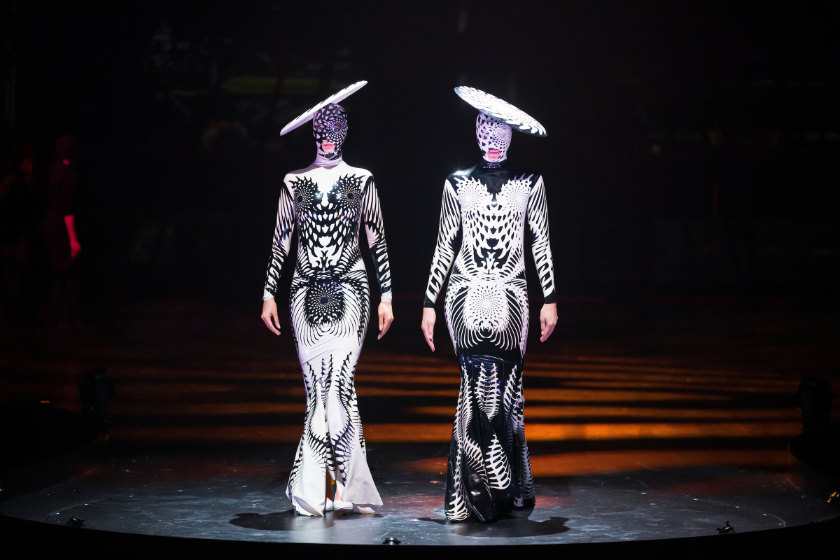 Student Innovation Award
Walk All Over Me, by Louise Dhyrfort, London.