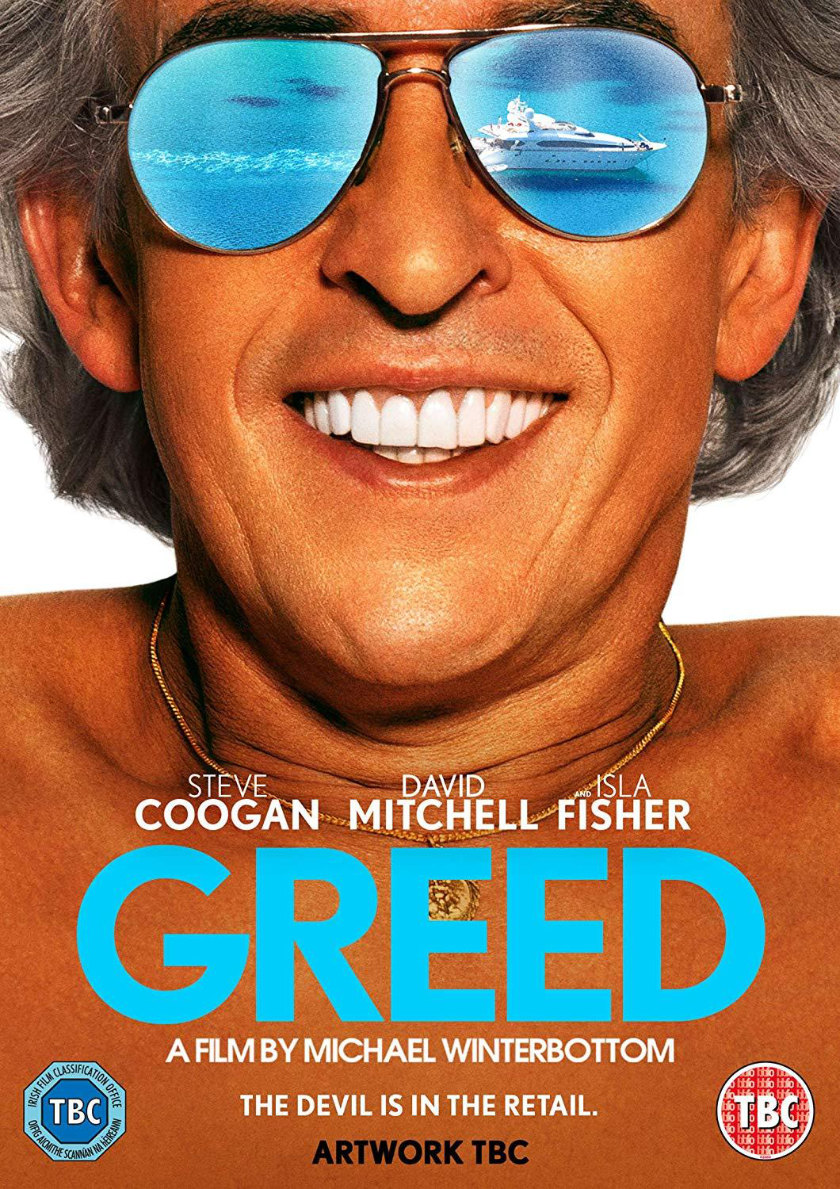 Greed, the new Steve Coogan comedy directed by Michael Winterbottom (The Trip), is a satirical tale about a thinly disguised version of Sir Philip Green, the head of Arcadia Group, who stood accused by various British government committees of plundering British Home Stores while it was under his company’s control. The phrase levelled at Sir Philip, ‘the unacceptable face of capitalism’, once dealt to Tiny Rowland, is used here at Coogan’s Sir Richard ‘Greedy’ McCreadie, just in case you weren’t sure whom they were parodying.
Lucire attended one viewing at a packed cinema, where moviegoers were turned away as it proved to be far more popular than anticipated.
Given the cast—Coogan, Isla Fisher, and David Mitchell—it would be wrong to expect much more than a comedy, and on this count, it delivers, with more topical panache than most films of the genre.
Up for criticism by the film are fast fashion—McCreadie spends his adult life pushing suppliers in Sri Lanka (the Indian locations are unconvincing) into a race to the bottom—as well as the shallow “unreality” of reality TV, or, as the trade calls it, unscripted drama. Included in the mix are the corrupt practices of modern business and their legal loopholes, and tax havens such as Monaco, where McCreadie’s ex-wife, Samantha, played by Fisher, is resident. Through all of this is the device of the officious bystander, Sir Richard’s biographer, Nick, played by Mitchell, who gets to interview certain parties, which Winterbottom shoots in documentary style.
Sir Richard’s 60th birthday bash on Mykonos obviously references Sir Philip’s £5 million 50th on Crete in 2002, right down to the togas, and this is where things take a turn that not even Sir Philip’s enemies would wish on the milliardaire. Asa Butterfield, as the McCreadys’ younger son, and Dinita Gohil, as Amanda, a Sri Lankan-born Brit working for McCready, give the film more depth at the points where it’s needed, showing that the farce in which the ultra-rich live have real victims, inside and outside of the immediate family. Whovians will spot Pearl Mackie as Cathy, the director of the reality show in which daughter Lily McCready, played by Sophie Cookson, stars, trying the Method whilst playing herself.
There’s a sense from earlier reviews—inevitable that we would have seen them given New Zealand’s later release—that the film doesn’t know what genre it is, whether it’s comedy, drama or documentary, an assessment with which we disagree. While the film puts a new spin on the term ‘eat the rich’, the last act wraps up the entirety of the film neatly: namely that for all the lessons that we might have learned, the fictional McGready family ticks on, with little changed. No, the outcome isn’t funny, but it is a call to action—it’s Winterbottom exercising pathos. Showing statistics about fast fashion, the income gap, and the single-digit earnings of Asian garment workers takes that one step further. Are we choosing to fund these lifestyles and the fast-fashion machine, or should we opt for the sort of designers often championed by this magazine, who work with Fair Trade, eschew seasons, and emphasize quality?
And sometimes it takes a film that is largely entertainment to make us realize just what has been going on. The message could well be lost if this were an out-and-out documentary, which would have had a limited audience; better to have us question our consumerist habits—you know, the ones we still observed as we lavished Amazon with US$11,000 per second as the COVID-19 pandemic panic began—in the form of entertainment, ensuring a wider reach. It’s not the first to do this, and it won’t be the last—it’s a long tradition that includes The Smothers Brothers Comedy Hour and South Park on television and, more recently, the oddly slow-moving Brexit with Benedict Cumberbatch, and the German feature Curveball. There’s nothing more appealing in the grey depths of winter, with overseas travel not available to us, than sunny, colourful Greek locales. And when you can travel again, pack those labels with a more ethical background.—Jack Yan, Publisher