Get quick facts on the BMW X1 at Autocade.

X and the city

Does an SUV without four-wheel drive make sense? Jack Yan looks at the BMW X1 Sdrive18d, and concludes that the German company understands us better than we would care to admit
photographed by the author

Every time we get an SUV on test, we attempt to get it dirty. Even if it’s briefly on a bit of metal road, at least it looks like we’ve tried seeing if the vehicle does what it claims to do. A clean SUV just seems misplaced, as out of place as a kind-hearted terrorist or an introverted Kardashian.

But this is BMW’s intent with the X1 Sdrive18d. Outwardly, it looks like the X1 that we tested a few years ago in Lucire. Behind the wheel, little has changed. But among the oily bits, this X1 only has rear-wheel drive, which means it’s no more or less capable than a regular 1- or 3-series saloon off-road.

This isn’t as daft as one might think. Hyundai has done well selling a front-wheel-drive version of its Tucson in the past, appealing to people who want the chunky looks and high seating position of an SUV, but who cannot foresee ever taking it off the Tarmac. There are buyers who believe SUVs are safer, in a highway version of mutually assured destruction, where bulk saves the day. If you look at the world’s largest car market—that of China—the two-wheel-drive SUV means big business, and a lot of their domestic car makers don’t even release four-wheel-drive versions.

BMW knows this. This is the most basic model as far as the New Zealand market is concerned—there’s a similar Sdrive16d in Europe with the engine giving only 116 PS—and it ticks all the boxes as far as image is concerned. The X1 has had a mid-cycle refresh—that’s when it gets a nip–tuck to keep it looking new—and our test car came with 17-inch wheels, sat-nav, a lovely, dark wood trim, reversing camera, and BMW’s Efficient Dynamics set-up, which helps with fuel consumption and captures the energy created through braking. The black detailing offsets the white body colour of our test car nicely. We’ve always said that the perfect SUV is where the seat is at the height of your posterior, and while it’s slightly lower for this writer, it should be fine for many. You’re up high, but not like the X5 or a Land Rover Discovery.

Speaking of seats, they have a gold weave pattern and matching stitching: attractive enough and unlike other BMWs that we had sampled before. This is repeated on the fabric on the doors, and, coupled with that dark wood trim, gives the Sdrive18d a poshness that you wouldn’t normally expect from the entry level. It’s even refined to drive: there’s little noise from the tyres or the outside.

The Sdrive18d has a turbocharger, which increases its power to 143 PS, and torque goes up to a healthy 320 Nm, but the driving experience is very civic. The car keeps the power in reserve and it doesn’t seem as willing as the Xdrive23d model that we tested in 2011, but that stresses that it’s about city driving. There’s enough power there to get you out of trouble in tricky city situations, and handling is trade-mark BMW: without the extra weight of four-wheel drive, the X1’s nimble. Another point for its urbaneness.

In fact, the styling that the X1 has—which we equated to a hot rod with its cab-backward proportions, notably its long front end—suits this urban SUV image better. BMW never said that the X1 was a tough, go-anywhere off-roader, just something for those who might occasionally need to drive on gravel. While it’s tempting at first glance to call it the Xbox One of X1s, since it looks like a four-wheel-drive vehicle with only half the capability, the reality is that it’s very well suited to its city role.

If there was anything to make it even more suited, it would be the plug-in electric powertrain of the i3, although that would hike up the price considerably. Interestingly, in China, one of the biggest car markets in the world, BMW and its partner Zhonghua have done just that: the Zinoro 1E is an X1 (sans kidney grille) with two-wheel drive and the 18 kWh powerplant, offered for lease to buyers there. It recognizes that Chinese buyers will never take their Zinoros off-road, in a country where nearly ever domestic car maker offers a form of crossover—even if it means putting cladding and a bull bar on to a Daewoo Matiz.

But what can we make of our diesel one? It’s frugal, netting 42·1 mpg (6·7 l/100 km), without the environmental impact of manufacturing lithium–ion batteries. We drove it in settings very close to what buyers would: around town with the occasional excursion into the suburbs via motorway. Carbon dioxide emissions are a mere 128 g/km, getting near the magic 100 g/km figure where the vehicle could qualify, in some countries, for eco-privileges. It might not be as frugal as the Zinoro, but these figures are nothing to be sneezed at.

Since BMW doesn’t make an estate version of its 1-series hatchback, the X1, in some ways, fills that role. That’s been the pattern in a lot of countries, where the traditional wagon has been disappearing. That might not be what buyers want to think when they purchase one. In New Zealand, there’s enough of a macho, outdoors culture for buyers to want to claim that their purchase is for those go-anywhere, off-road moments. But the reality is that the X1 targets the real, city-only buyer of the SUV remarkably well, enough for it to be seen as the ideal vehicle for a lot of people. • 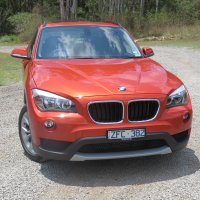 The adventurous lifestyle
Sarah MacKenzie hops across the Tasman Sea to sample the refreshed 2013 BMW X1, an SUV ideal for the young adventurous couple
photographed by the author 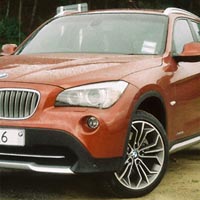 The X factor
BMW’s X1 SUV has more sporting proportions and a more sensible size for the sensitive early 2010s. However, it’s not the complete package, as Jack Yan explains
photographed by the author