Shattered The aftermath of the Nepal earthquake, leaving over 6,000 dead

Kayla Newhouse is a writer for Lucire.

A Lucire exclusive Kayla Newhouse, who was in Kathmandu when the 2015 Nepal earthquake struck, recounts in the first of a two-part story how she was one of the lucky ones, enjoying relative comfort as a foreign survivor and experiencing the kindness of the Nepalese
photographed by Hilmi Hacaloğlu/Creative Commons

I remember a moment in the gravel lot where I slept the first night, an instant refugee camp. I watched a Nepalese man giving out packets of Oreos to everyone, local and foreign, no discrimination. The Nepalese see a person in need and do not question worth, family or nationality. First they see a human being. Even though they are themselves in need, they help. There is a difference between the cultures. The Nepalese take care of humans, even when there is not enough for everyone.

On the second night, I found myself in complete luxury at the American club. Boxes of MREs (Meals Ready to Eat) had been set out in abundant quantities. At first, it led to incredible waste. People would take a packet, eat one part and throw out what they didn’t like, then go back for more. Constant eating. The amount of unconsumed food could have fed hundreds outside. The night before I had given away my food to the family sharing our fire. Here, with such abundance, I had to resist the irrational inclination to grab as many Cheez-Its, Fruit Roll-Ups, chocolates, candy bars and Nutella that I could. They had been put out to ‘boost morale’. Someone made a sign over a table of empty boxes: ‘Please save extra food … leave here.’ Reminded not to waste, we learned to step out of our disposable culture, to return what we didn’t use so that others could have it. The announcement, ‘We want to thank everyone for their cooperation and helpfulness,’ followed by applause seemed incongruous: why be commended for something that should be natural?

‘Where were you when it happened?’ became the obvious ice-breaker. I was on a bus, and didn’t realize there was an earthquake, until we started driving past fridge-sized rocks in the road and crushed cars. ‘We were napping, thought it was the shoddy construction next door falling down.’ The stories flew as people compared experiences. ‘The whole building moved, I could feel it swaying, I was on the sixth floor.’ ‘This guy jumped out of a window, he seemed so sure, so we jumped out, too.’ ‘God, if we had jumped out of our place, can you imagine, onto that rebar?’ ‘We were about to walk in to our hotel, it crumbled back into a step well.’ ‘… Just standing there in Durbar Square and this brick pillar falls down next to me crushing a fruit vendor.’ ‘We’re from California, so we were yelling at him to get in the doorway, but he didn’t listen, tried to run and bounced like he was jumping on a trampoline.’ ‘Yeah, right down the stairs.’ ‘Actually they say that’s a safe place to be—a solid pillar of concrete,’ the Californian added.

The officer in charge broke in with an announcement. ‘Last night it got cold and there were many without blankets. This morning when I walked around I saw people with four or five blankets. Three underneath for extra cushion and two more on top as covers. This is unacceptable. We need to share. One blanket per person. If you are one of these people, please leave your extra blankets and pads on this table. If I catch anyone with more than one blanket tonight, you are out. It is not your right to be here. I will forcibly remove the blankets from you and you can go sleep on the street.’

Smaller aftershocks. ‘Did you feel that?’ became the question. ‘I think I’m just imagining it sometimes, I can never tell.’ There was no mistaking the bigger rumbles. People roused from fitful sleep, bolted. Nowhere to go, you couldn’t get away. The whole earth was moving. During the next big one around noon I tried to run into the open but I was on a rolling sea. I got onto all fours, trying to comprehend how the solid earth had turned liquid. I was overcome by nausea.

Within the compound, water was pumped from the swimming pool for hot showers. An announcement, ‘We would like to thank our team who have been working so hard to repair the broken pipes so we can have filtered water from our well. Soon you’ll be able to flush the toilet without buckets and wash your hands.’ Clapping. I looked at my friends: ‘We’re literally going to be flushing our toilets with filtered water?’

I overheard a girl, newly arrived at the club, who talked to her mother on the phone, calming after a bout of hysteria. ‘It’s a freakin’ paradise here, like you don’t understand, it’s so nice here.’ It was true. I felt tremendous guilt and thought of my new friends still out on the street with no embassy to shelter them.

I am still taken back in my memory to that first night in the gravel field. Where people shared everything they had with strangers, where people came together and tried to feel normal. We were vulnerable, but we had each other. When drops of rain appeared, tarps were quickly strung, attached haphazardly to trees or posts. People huddled together under them, wrapped tightly in the classic brown blankets, splashes of purple and red flowers. At 3 a.m. someone made popcorn over the fire and passed it around along with Raksi, a strong barley liquor whose taste will always remind me of spinach, sake, compassionate friends and the ruins of ancient temples. •

A list of aid agencies is available here. Please help if you can. 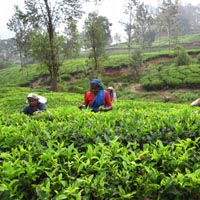 Letter from Sri Lanka
Sri Lanka remains one of the unspoiled destinations in south Asia. Stanley Moss takes in the island paradise as it shares its rich history with the twenty-ﬁrst century
photographed by the author and courtesy Aman Resorts