A warning Susi Newborn highlights that our planet is facing a critical danger, and women are on the frontline

Susi Newborn is the campaigns’ coordinator for Oxfam, a co-founder of Greenpeace, and a guest contributor to Lucire.

Women must be at the forefront of climate change solutions

Susi Newborn breaks down the issues relating to climate change, something which affects women far more than men, and issues a challenge as planet Earth must fight for its survival

We all know that the way we live our daily lives affects the environment, and that changes in the environment can sometime spell big trouble for humans. Now, scientists are warning that the way people have lived since the Industrial Revolution is catching up with us in the form of ‘global warming’ or ‘climate change’.

No longer the elephant in the room, climate change is the harbinger of the Anthropocene era, the epoch of human influence on our climate, a real and rampaging threat if not directly to us, then clearly to our children, grandchildren and generations yet unborn.

Global warming is not just one of the biggest challenges we have ever faced, it is also the greatest human rights¸ abuse of all times. It is the most urgent global problem we have ever confronted and urgently demands an unprecedented global solution.

As the primary victims of global warming, women are also the main source of solutions and as such must be placed at the heart of these global solutions at international, national and local levels. Mao Zedong said that women hold up half of the sky. Now it is time for them to hold up the sky, in its entirety.

Millions of vulnerable people around the world are being hit first and worst by pollution they never caused. People are dying, their livelihoods threatened by fresh water contamination, their ocean food basket slowly destroyed by acidification, storms ravaging their towns and villages, the chaos of irregular seasons—the list is endless.

As the primary victims of global warming, women make up 70 per cent of those in poverty throughout the world and as a result, they are—and will continue to be—the most heavily affected. Climate-induced weather events kill far more women than men—90 per cent in some cases. And yet, in many regions, women are the ones responsible for providing food, water and fuel for their families. When food security and availability of water bring constraints to the women in the community, it often results in girls dropping out of school to help in the home, increasing the propensity for child marriage. In some remote areas, 70 to 75 per cent of girls drop out of education because of early marriage.

Three hundred million fewer women have mobile phones than men, and this means warnings of major weather events just do not reach them. In the 1991 cyclone which battered Bangladesh, 90 per cent of the 140,000 victims were women. In Myanmar’s 2008 cyclone Nargis, 67 per cent of the 138,000 dead or missing were women.

To understand what is happening with the changing climate, however, it is necessary to get to the basics of what is happening in our atmosphere, right now. This is somewhat complicated, so please bear with me.

It is common knowledge that in all international climate negotiations, the goal is to reduce pollution in order to stop the planet warming a further 2°C. This is because a warmer planet is starting to cause something called “tipping-points”—such as forests no longer being able to absorb carbon. The CO2 in the atmosphere is measured in parts per million (ppm) and the optimum for a healthy planet is 360 ppm. The average for 2014 was nearly 400 ppm.

With 1°C of warming, we have already witnessed the irreversible melting of the Arctic and, now, in parts of the Antarctic, releasing methane—described as CO2 on steroids—into the atmosphere. This is what is called a “feedback loop”—when one tipping-point triggers something irreversible. The problem is we have no absolutely idea what feedback loops await us. We can try guessing—things like the collapse of the Gulf Stream from the decline of the flow of fresh water from the Arctic, or the increasing difficulty reflecting heat back into space from sea level rise. Meanwhile, we continue to play Russian roulette with planet Earth while the system with the very power to avert the end of civilization as we know it, seems intent on destroying it. When 1 per cent of the world controls the financial markets, it is clear that stopping global warming will also end extreme inequality.

We know that to keep warming below 2°C we have to keep to a carbon budget of 1 teratonne, or 10¹² tons. We know that we have already used up to 600 million tons of carbon and that in 30 years’ time we will have exhausted our carbon budget.

We know that we have to leave 80 per cent of the fossil fuels in the ground because we just don’t know what catastrophic outcomes—tipping points, feedback loops—we have signed ourselves up for.

Then there is the question of the ‘emissions’ gap’.

We know that leaders all around the world are saying we have to keep warming to 2°C, yet all the proposals on the table at these international climate change meetings add up to a massive 6°C of warming. Yes, you read that right! Tropical and subtropical zones are likely to become uninhabitable at 5–6°C of warming, not to mention sea level rise wiping out many low-lying areas around the world. This shocking difference between what world leaders say they want to do and what they are actually doing is rather quaintly called the emissions’ gap, more likely an emissions’ chasm from which there is no return. Even scarier is the fact that that there has not been a single proposal, debate or even position paper on limiting fossil fuel production put forward during these international climate negotiations.

I don’t blame you for thinking this is all totally crazy. It is. Insane contradictions at every level, a case of world leaders fiddling while the planet burns as they pass a legal obligation on current and future governments to help trash the world’s atmosphere.

None of this is anything new, however. Twenty-six years ago, NASA scientist Jim Hansen—known for works of impeccable quality and importance—first made public his concerns around global warming. His predictions back then for what would happen to a warming planet have been correct, over and over again.

I live in the South Pacific, a region responsible for 0·06 per cent of total global emissions, yet which finds itself at the frontline of climate change impacts. A 3–4°C warming would represent a 60 cm sea level rise or more and many of our islands will become unliveable. If the world keeps burning fossil fuels at the current pace, places like Kiribati, Tuvalu and Tokelau will no longer exist in 30 or 40 years’ time. Many of the inhabitants will have been forced to relocate, to New Zealand and Australia or other Pacific islands bringing their own set of cultural and social problems. Last year, the High Court in New Zealand refused to grant refugee status to an I-Kiribati man with two children born in New Zealand who feared for the lives of his children should he return to his climate-ravaged island.

Whilst many tell them that it is hopeless, or that it is too late, the people on the climate frontline are not prepared to accept this future for their islands. Their land is part of them, their ancestors are buried there; it is where they belong.

During the massive cyclone Wilma in 2010 which destroyed parts of Samoa and Tonga and the ensuing tsunami warning throughout the region, I received emails from a woman friend in Kiribati, asking for help. ‘They are telling us to go to higher ground,’ she wrote, ‘but there is no higher ground. Please pray for us.’ The highest point on Kiribati is only 2 m above sea level.

Worn down by the seemingly constant king tides, which flood the towns and villages destroy the cemeteries, turns the drinking water brackish and contaminated with fecal material from damaged sewers, the women of the Pacific are fighting, and their message is clear: the Pacific is not drowning, the Pacific is fighting, fighting for its survival, and we will fight and fight and fight.

For anyone who believes that the Pacific Islands belong above water, not under, our work is to genuinely stand with the Pacific in this fight. Their fight is our fight. For the Pacific, global warming is a weapon of mass destruction.

As the sea level rises, so people around the world are rising—rising to form a mass climate justice movement fuelled by the power of what Naomi Klein terms the ‘ferocious love’ that activists and communities express for the places and lifeforms they are trying so passionately to defend, taking online movements offline so people can stand shoulder to shoulder and resist this madness.

Last year, UN Secretary-General Ban Ki-Moon said, ahead of the Climate Summit in September, ‘Never before in history have human beings been called on to act collectively in defence of the Earth … When we, humans, walk together in pursuit of a righteous cause, we become an irresistible force.’

This global response, this irresistible force to avert catastrophic global warming, will have women at every level of decision-making. Man-made climate change is exactly that—‘man-made’—a construct of the patriarchy which has sold the Garden of Eden to the highest bidder.

At the end of the year, climate negotiators and world leaders will meet in Paris to come up with a global climate change agreement. There have been promises to put women at the heart of all negotiations, to increase the resilience of smallholder farmers—who are mostly women—to the impact of climate change.

As women everywhere become empowered to take back the planet, the hand that once rocked the cradle will start rocking the boat. Putting women at the forefront of the fight against climate change is probably the only choice we have if we are not to witness the irrevocable destruction of our entire world, within a matter of a few decades. Do we really want to put our planet on life support while we wait for it to go “full-tilt monster” on us? No one in their right mind would answer yes. • 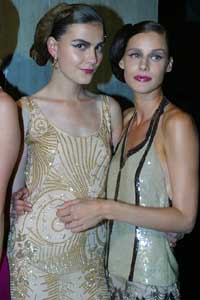 You only live twice
The environmental consciousness of Gabriel Scarvelli, Mercedes Australian Fashion Week darling and a survivor of the onset of liver cancer by Carolyn Enting
photographed by Clive Souness/Kahuna Digital, Alex Zotos and the author 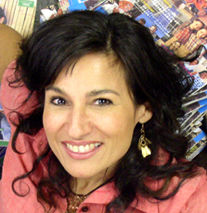 My Fair (Trade) lady
Safia Minney’s People Tree is considered a pioneer in Fair Trade fashion, taking an ethical and environmental stance that is becoming increasingly relevant by Jack Yan 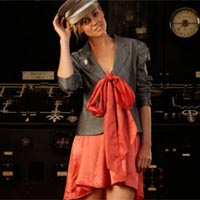 Making your sustainable start
There’s no reason you have to look like a homeless hippie while caring for the environment. Uma Lele gathered these for you as a starting point for your journey to the green side