Above: The daily market at Bambu Indah, which follows in the next part of this series.

VOLANTE Stanley Moss heads to Bali for seven weeks, and immerses himself into the local culture. This is the first in a series, beginning with a guide to Bali itself

Above, from top: Canang offering outside a temple. Temple spirits.

It’s the spirits who are in charge in Bali: they are the first things you hear about when you arrive, there’s evidence of them everywhere you look, and they are the last things you remember. People thank the spirits for good fortune, and pray to appease them over the delivery of bad luck. For a mythological isle which has been so blatantly invaded by western-style tourism, it’s amazing to find that devout, daily traditional practice has survived. Bali’s overcrowded and overdeveloped southeastern shore hasn’t successfully obliterated temples, ceremonies, processions, cremations, dances, or the ubiquitous offerings seen everywhere you walk—watch your step!

Balinese culture has somehow managed to prevail despite an infestation of big brands, digital signage and automobile culture. A low skyline has been preserved—height restrictions permit buildings no taller than the Mother Temple. Men still wear the sarong and a hat called the udeng, and women wander the roadsides and rice paddies in colourful traditional garb, the rule, not the exception. Today you must look far afield from the tourist enclaves, beyond the domains of Four Seasons and the long-awaited Kempinski. Heritage Bali is still there to discover. It takes some digging, some wandering, some patience. History has a long memory. Despite the intrusions, the past hasn’t disappeared—it’s just been elbowed aside.

Bali’s complexity of sensations and hidden treasures remain a randomized puzzle. Over the course of seven weeks Lucire visited the north and south shores, exploring a range of choice and diversity. In the interest of making some sense, here follows a miscellany of what you might expect to encounter in your island odyssey, followed by lodging possibilities experienced personally by us.

Canang making. Whole markets are devoted to these woven offerings to the spirits, a daily part of life. Wake up early enough and you’ll encounter a local pandit offering a blessing and placing the small flower-filled baskets almost anywhere, outside temples, next to doorways, in the centre of your path.

Cash machines. You’ll need a lot of small bills in Bali, but bancomats only dispense a maximum of Rp2 million at a time, the equivalent of around US$150. Some machines dispense as little as Rp1 million at a time. Be vigilant! We learned there is a lot of credit card fraud in Bali, so while cash is mostly a better option, machines are often hacked with bogus card reader ports. Draw money only at reputable banks, most of which have on-site security. While local money-changers are reputed to offer the best exchange rates, be aware of the rates at which commissions are charged, which can be quite elastic.

Chocolate. A new emerging cottage industry, with young businesses offering organic and sustainable small production chocolates grown in plantations on the southwest side of the island.


Cigarettes. Public health clearly isn’t a big agenda item for government, which controls the tobacco monopoly. Smoking is everywhere, neither frowned upon nor prohibited. One widely seen brand named Surya Pro even goes so far as to use the tagline ‘Never Quit’ in their promotion. Marlboro advertises its ‘True International Quality’ and advises, ‘You Decide.’

Civet coffee. The tourist-centric coffee available at roadside stands is ostensibly made of beans taken from wild cat poop. Didn’t try it. ‘Bali coffee’ is offered at a premium price on most menus. It’s not that great, but of course we are from Italy. Indonesia is justly proud of its local coffees, especially Sumatran Mandekeling. We got good quality, fresh and nicely packaged souvenir coffee in sewn burlap bags at a decent price at the airport duty-free shop, around US$10 for 250 g of whole beans.

Cloth. It’s hard to fine real, authentic traditional batik cloth. Your driver will take you to a commodified tourist place where a 2 m length can be priced at upwards of US$120. We’re not sure it’s the real thing. We weren’t able to even locate a factory making batik, let alone visit one! We did find a vast selection of both batik and kadi cloths at a theme park called Krishna (near Singaraja) on the north shore, low-end prices, set up for tourists in a monolithic store, a very funny experience which included mountains of cheap souvenirs and giggling shop girls.

Dialects. There are 700 of them in Indonesia. One village can’t understand the other. Stick with English.

Diving and snorkelling. The best locations can be found on the northwest corner of the island, where hordes of electric-coloured tropical fish inhabit near-pristine coral reefs near Menjangan Island. A number of waterfront resorts just west of Pemuteran face the popular inlet where day charter boats and guides can be easily booked. Load up on sunblock.

Drinking water. Use bottled water only. Tap water known to cause ‘Bali belly.’

Gamelans. Local percussion instrument made from bamboo. It requires both rhythm and coordination, and you will hear it everywhere.

Geckos. Noisy little lizards. We heard the story of an irate French tourist who complained to an innkeeper that a bird had got into his room. Locals consider geckos good luck, and friends. Geckos are completely harmless and help control the insect population.

Get a driver. We admit no interest in navigating the roads, jockeying traffic or understanding a Byzantine city-labelling signage system. If you want to see the scenery and reach your destination expeditiously with the least anxiety, yield the driver’s seat to a knowledgeable pro. Travel by chauffered car in Bali is one of the best bargains around.

Hati hati means ‘caution’ and you’ll see it on road signs. A word to the wise.

If you must, three communities suffer from chronic overdevelopment: Kuta, an enclave of drunken Antipodeans, best avoided; Seminyak, a honkytonk Main Street with a reputation for bad behaviour, but a convenient meeting-point and quite central to everything; and Canggu (pronounced chan-goo), outstanding surfing beaches experiencing an uncontrolled building boom and a serious noise pollution problem.

Kites. The national sport. Look up, and there they are. Bali hosts an International Kite Festival in June and July. Community competitions feature elaborate designs and traditional costumes, which serve to make the spirits happy.

Massage. Part of the local culture, available everywhere and inexpensive.


North shore. The last bastion of the old Bali. The only part of the island remaining to develop, and it is happening, changing, evolving as demand for tourism continues unabated. Explore the north now, before the projected second airport is built there, and mega hotels appear.

Plastic waste. Bali hasn’t yet tackled this problem. Used consumer plastics clutter the roadsides, rivers, beaches and diving sites. There doesn’t seem to be evidence of serious recycling, let alone separating of trash. We learned there is only one recycling plant on the entire island. Some hotels, like Ritz–Carlton, hire locals to sweep the beach daily.

Religion. Mostly a fusion of Hindu and Buddhist, with many Muslim communities. Processions, ceremonies, weddings and cremations are a part of daily life. Expect your car to grind to a halt as communities mobilize on foot to commemorate important Hindu festivals and occasions. Brides decked out in ornate golden headgear are especially good material for photographers, and the participants love to have their pictures taken.

Silent Day, Nyepi. A yearly Hindu event where the entire country shuts down. No flights scheduled, no one can leave or enter Bali. Everything is closed and no light is meant to be lit, no one is allowed to drive or walk. During this holiday the tourists hotels are granted some latitude. But resorts cover their windows and a minimal number of staff work. Everyone is meant to stay indoors.

Spices. We always look for lightweight items we can carry back for friends. Bali has locally produced cloves, black pepper, tumeric, ginger, chilis, palm sugar and vanilla. Most of these are available at markets, in small packets. Watch out for the chilis, which can be extra-hot.

The Black Temple near Singaraja


Temples. Every family compound has one, and you see them every 50 m on every settled street. Each entrance has sculpted figures flanking the gateway, representing the spirit guarding the temple. Ornate large-scale public temples have limited access, and foreign gentlemen guests are required to wear the sarong when visiting, especially during festivals. Temples seem to be in a constant state of building, repair or reconstruction, and much of life centres around them. Don’t expect the statues to be “cleaned” of weathering—the Balinese have a reverence for nature, and a worn statue is considered beautiful, desirable and normal.

Tourist tax. Budget travellers beware: always expect a whopping 21 per cent tourist tax to be added to your lodging bill on top of the quoted rate.

Ubud. This traditional craft and artisan enclave deserves an entire article of its own, but for our purposes brevity must serve. Once the centre of classic art, dance, craft and puppetry, the city has grown into a long main street of tourist shops, with side streets filled with more of the same, surrounded by clusters of luxury resorts, set among woods, jungled canyons and rice paddies. There’s a fine art museum located in its own sprawling garden, where the yearly Jazz Festival happens, well worth a visit. In the surrounding neighbourhoods you’ll encounter traditional stone and wood carvers, artisans producing temple ornaments and vendors of kitschy art. Bali is a trust-based society, meaning the best way to choose a vendor is to get a referral. We did happen upon Wood & Soul, a family-owned business housed in a giant pavilion, with a vast selection of carved teak and acacia items arrayed on endless shelves made from plows, at near-wholesale prices. You could browse there for a long time. Overhead, birds in cages chitter and chatter as you overload your basket.

Visas. A potential minefield if you wish to stay longer than 30 days. For a simple 30-day visit you can stand in line and buy an automatic visa on arrival, inbound at the airport, around US$30. To extend the visa to 60 days, you must either hire an expediter or visit an immigration office, wait in line, surrender your passport, be fingerprinted and photographed and pay another surcharge. Lower your expectations: the extension may take as long as a week to process. To avoid bureaucracy, the Singaraja office is known for fast service and short waiting time. Stay too long without an extension and you’ll be fined at the airport on your way out.

Westernization and digital signage. Vestiges of traditional Balinese culture can be discerned everywhere at the periphery, but traditional signage has largely disappeared. Instead, garish digital banners garland open-front stores, and strands of plastic single-use shampoo packets festoon shopfronts, swaying in the breeze. Tobacco companies have effectively co­opted the visual landscapes with their branded sunshades, which shroud every small-business façade.

Above, from top: Cloves drying near a temple. Clove workers with 100 kg sacks. 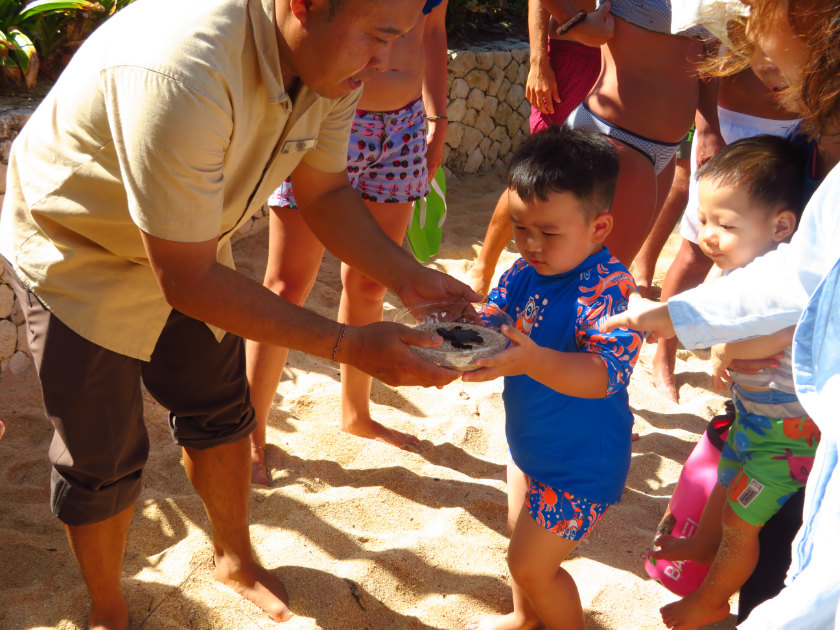 Mother turtles choose Bali beach for nesting
Sixty-two hatchlings were in luck as they were released safely into the wild near the Ritz–Carlton Bali in Nusa Dua, reports Stanley Moss
Photographed by Paula Sweet 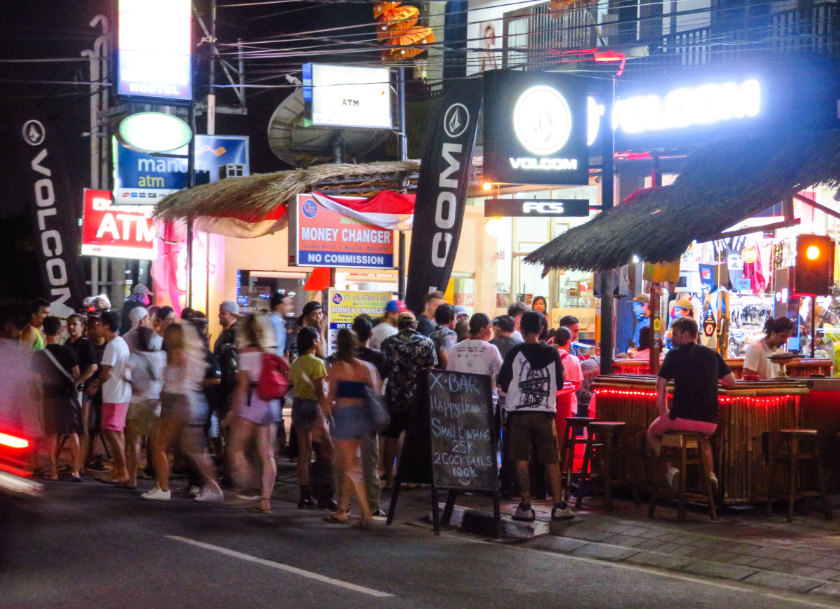 You can’t hear yourself think in Canggu
Those exotic playgrounds aren’t what you expect when they haven’t coped with growth, with noise pollution the unwelcome consequence, as Stanley Moss discovers in Canggu, Bali
Photographed by Paula Sweet