Main photograph by the author

London can be an impersonal city for many, even for those living there. And for singles, it’s often no surprise that apps have come to their aid to meet other people. Oyster Dates, created by Anishka Prasad, a Fiji-born lawyer who trained in New Zealand and is now based in the UK, is a new app for those single working professionals who want to meet someone—and takes away the pressure of where to eat on the first date by examining dining preferences and matching them to restaurants that have signed up.

Prasad originally moved to the UK to do an MBA at Imperial College Business School. As she describes it, ‘I … had plans of transitioning from private practice law to a career in entrepreneurship. I felt that I was always a problem solver and entrepreneurship as a career always appealed for those reasons. Moving to London was a logical and evitable move given that. The market for support with start-ups is quite robust in London and opportunities for business and partnerships are very accessible as well.’

She credits her formative years in Fiji for giving her a strong foundation: ‘The lifestyle and schooling system were exceptionally disciplined and expectations to perform at school for instance, was always a focal point. These earlier years instilled routines and practices subconsciously embed a sense of routine, process, drive, and discipline in a child. I am grateful for that childhood and upbringing as it has played a major role in moulding me into the adult that I am today.’

After she got to London, Prasad wasted no time in indulging her entrepreneurial drive. Her legal background helped: ‘I think lawyers get trained to see the business landscape through a unique lens, which enables them to be quite diverse and multidisciplinary when it comes to the world of start-ups and app development.’

With an interest in law tech, and after finding that legal practitioners lacked a platform to keep records of online dispute resolutions and mediations, she conceptualized a dispute management platform called Resolv. Supported by the Imperial Enterprise Lab, Prasad launched Resolv in 2019, and her own background helped find potential risks and craft a set of risk-mitigation strategies.

Prasad explains that with London being one of the world’s largest commercial hubs, and with the economies of scale the UK had over New Zealand, she found it a more viable space in which to develop her ideas.

Oyster Dates is a more recent idea. Prasad explains, ‘The matrix behind it was developed to understand what was potentially going amiss by our competitors. I guess a concept will always only be a concept until you do something to make it a reality. In an average lifetime, almost everyone has many venture ideas, but are held back due to personal circumstances, availability of opportunities, the right partnerships, or simply life itself. I’d just like to consider myself as someone who assesses the viability of a venture’s idea commercially, and if I have capacity to create, be involved and execute, I’ll give it go to exhaust its potential.

‘Oyster’s concept was developed as a hybrid-dating app, which tackles the pain point of early conversations and dilemmas of first dates and deciding places to eat.’

Prasad created a business model that served both listed restaurants and app subscribers. From there, ‘A comparative analysis was conducted to extract various value drivers that will be necessary to enable a dating and dining app to function in the London market.’

She knows the market well, being a single professional who fits into Oyster’s 25–50 age bracket, and adds that Londoners already have a culture of dining out as a way of meeting people. She feels singles face an ‘age-old question of where to eat on the first date, the style, and the location and with whom.’

When signing up, users will have to complete a questionnaire on their dining preferences. From there, the app will match them with the restaurant and a companion of similar interests. ‘Therefore, you are guaranteed that at least you know you will enjoy the meal, the company you select will also have the same tastes in food as yourself, and you know you will at least have this in common. Unlike other dating apps where you select the individual and then try to find a location where you would be happy to meet up, with Oyster you pick the restaurant and then decide if you would like company. If so the app will give you a list of individuals that either have eaten at the same restaurant or have selected that restaurant’s style.’ There is both a basic and premium subscription model.

Already the concept has appealed to London restaurants. Despite Oyster Dates’ early days, Michelin-star chef Atul Kochhar and his award-winning restaurants Hawkyns, Sindhu, and Indian Essence have signed up. And Prasad isn’t going to stop at just London: she has New York, Paris and Melbourne in her sights, among others. For now, London is Oyster Dates’ first home, and a great way for those in the city to make a potentially special connection. • 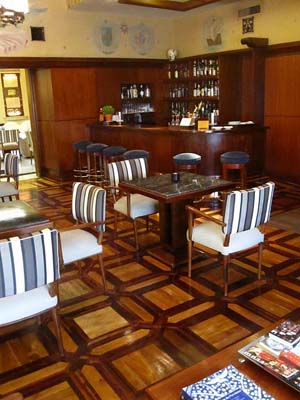 Off to London, Lisbon, Livorno, Lille, Lahore
Travel editor Stanley Moss updates us on his wanderings, brought to you by the letter L
Photographed by the author 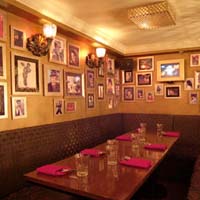 Summer in London
Stanley Moss packs in a lot on his London walkabout, from Asian food to Guy Bourdin