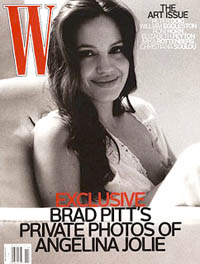 I was surprised to read in Entertainment Weekly that there is still controversy over public breast-feeding in the United States.
I largely agree with Mike Bruno at EW with his reactions to the cover of Advance Publications’ W, where actress Angelina Jolie is shown in a ‘private’ photograph breast-feeding her baby. The initial reaction: publicity-seekers. The second reaction: what is so wrong with breast-feeding? It deserves promotion, and better having a celebrity do this for a worthwhile cause than showing that she doesn’t wear knickers.
This comment from Mr Bruno got me: ‘Not surprisingly, the reaction to the photo has been mixed with some people lauding Brangelina for being open about breastfeeding, something still considered taboo in our nation’s more puritanical circles’.
Taboo?
My reaction to that is that a segment of the population of the United States is more out of step with the occident than I thought.
I am a Christian and I stop short at what I call vulgar behaviour, including coarse language, to the point where some people feel I am being excessively Ward Cleaver.
And I have to give a vote for God and nature, versus milk powder and pharmaceutical companies.
Most mothers who choose to breast-feed publicly are pretty skilled at retaining their modesty, anyway, and speaking for myself, it is not exactly troublesome to avert my eyes brie?y out of good manners.
They give the rest of us a quick warning ?rst, too.
And that has been the experience in most western countries that I have visited or lived in.
In fact, the Americans I know would not have a problem with breast-feeding in public.
We have seldom covered Ms Jolie, with the exception generally being her charity work. We never saw too much remarkable about her romance with Brad Pitt that was worth column inches here; and I can only think that it was her curvy ?gure that prompted much of the obsession by male paparazzi.
From a publisher’s point-of-view, I can deal with devoting a few words to Ms Jolie this time.