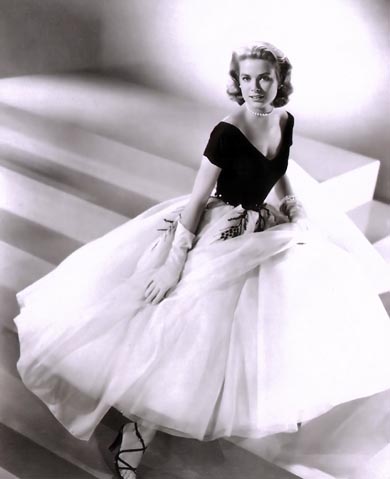 Above Grace Kelly in a publicity shot for Rear Window.

The Victoria & Albert Museum will showcase Grace Kelly’s wardrobe with over 50 of her outﬁts on show, including hats and the original Hermès Kelly bag. Grace Kelly: Style Icon runs from April 17 to September 26 in room 40 of the Museum.
Her dresses from ﬁlms such as High Society and Rear Window are included, as well as the gown she wore to accept her Oscar in 1955. The dress she wore on the announcement of her engagement to HSH Prince Rainier will be on display, along with her lace wedding dress, which she wore in her marriage ceremony in 1956.
As Princess Grace of Monaco, she had a selection of couture gowns from Dior, Balenciaga, Givenchy and Yves St Laurent. Mainly from the 1960s and 1970s, 35 outﬁts will be shown.
The exhibition will also include ﬁlm footage, posters, family photographs and magazines.
Kelly died in 1982 after a car accident, and would have turned 80 last month.
An admission charge will apply.