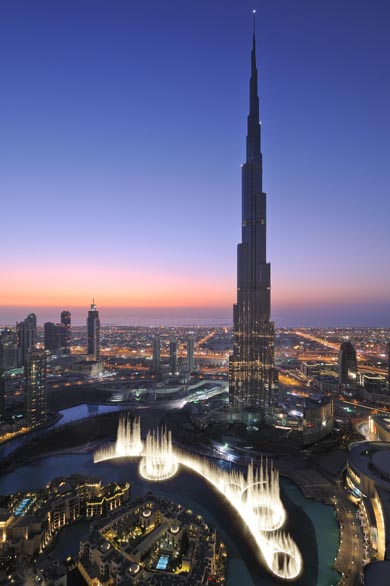 A deﬁnite date has been given for the opening of the Armani Hotel Dubai in the world’s tallest building, the Burj Khalifa: April 21.
This is over a month later than the originally projected date of March 18, as detailed in this publication in January.
The hotel has been designed by Giorgio Armani and marks the designer’s début into the hospitality sector.
Armani stated in a release, ‘My ambition for Armani Hotel Dubai—the ﬁrst of a collection of Armani hotels, resorts and residences that will soon circle the world—is to celebrate comfort and style by providing the highest standards of design, hospitality and service.’
Mr Mohamed Alabbar, chairman of Emaar Properties, said, ‘Armani Hotel Dubai will further also establish Burj Khalifa as one of the world’s unmatched luxury destinations.’
The hotel will feature: eight dining experiences; Armani/Privé, an upscale lounge; Armani/Spa, with 12,000 ft² comprising treatment rooms, suites and an outdoor swimming pool; a chocolate store, a ﬂorist and a galleria with couture accessories. The total area is 269,000 ft², including the concourse, ground ﬂoor, levels 1 to 8 and levels 38 and 39, with 160 rooms.
Since its opening, the 828 m (2,717 ft) tall Burj Khalifa has faced problems from its sudden renaming (where it had failed to secure the domain name) to technical problems in February that trapped people in an elevator, a month after its opening.
The tower’s observation deck reopened on April 4.