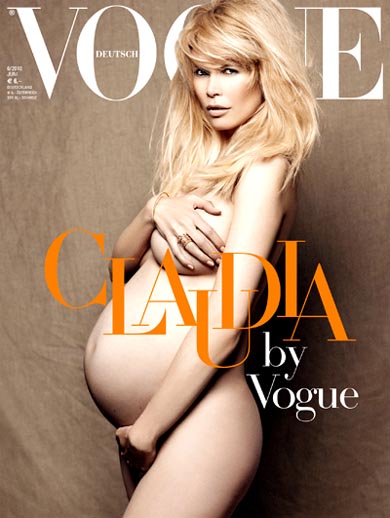 A pregnant Claudia Schiffer appears on the June 2010 cover of Deutsch Vogue in the nude, photographed by Karl Lagerfeld.
Supermodel Schiffer, 39, who has appeared on 11 covers of the magazine, is expected to give birth this month. This is her third child.
Lagerfeld says he felt it important to show Schiffer positively and in a different light.
It is Schiffer’s second nude shoot during this pregnancy that Lucire has covered: the ﬁrst was in March, for a breast cancer campaign, where she appeared with Kylie Minogue and Sienna Miller.
The image recalls a 1991 Vanity Fair cover, featuring a naked and pregnant Demi Moore and shot by Annie Leibovitz.
Deutsch Vogue has a preview of the story and a “making-of” video on its website.
Schiffer was ﬁrst discovered outside a Düsseldorf nightclub 23 years ago.