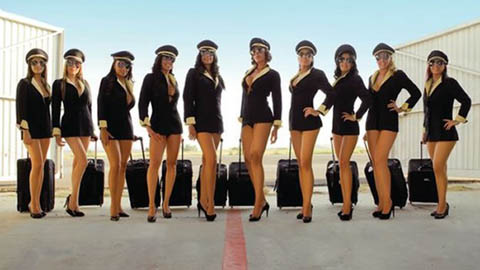 It’s becoming a more regular idea now: if you’re a ﬂight attendant and your airline is in trouble, then get your kit off and print a calendar.
Weeks after the annual Ryanair calendar—which, this year, was more toned down compared to the 2010 edition—a group of former Mexicana Airlines attendantshas launched its 2011 calendar.
However, the aeromozas’ posing might lead them to continue being out of work, according to their union, which claims that they have broken its rules.
Mexicana ﬁled for bankruptcy and suspended its operations in August. The 10 ﬂight attendants who appear in the calendar are out of work.
Mexicana may resume ﬂights next month, but with 30 per cent of its original staff numbers.
There was little outcry in México over objectiﬁcation or political incorrectness.
The only controversy is the possibility that the women will not be rehired because they have broken the rules of the Asociación Sindical de Sobrecargos de Aviación, their union, according to its secretary-general Lizette Clavel.
The ﬁight attendants say that as they are unemployed and that the Mexicana logo has not been used on any image, the rules of the union do not apply.
They have also posed with swimwear, albeit suggestively.
The notable difference between the Mexicana and Ryanair calendars is that the later one is self-funded. The ﬂight attendants put in their own savings to get the ﬁrst 1,000 published and printed—at a cost of MEX$100,000 (US$8,000).
The calendar is the brainchild of Coral Perez, who told the Associated Press: ‘We needed the money.’ She and some of her colleagues appear in the YouTube video below.
A Facebook page was set up to promote the calendar.
The ﬁrst 1,000 were already sold out before the launch on Thursday. A second printing of 3,000 is currently being organized.
Each calendar costs MEX$149 (c. US$12).
The ﬂight attendants have become ﬂeeting celebrities in México, performing autograph-signings at launch parties covered by the local media.
The idea is not new. Earlier this year, Air Comet, the bankrupted Spanish airline, saw its ﬂight attendants pose for a calendar, although with more nudity, after they were out of work. That calendar sold for a more expensive €15.