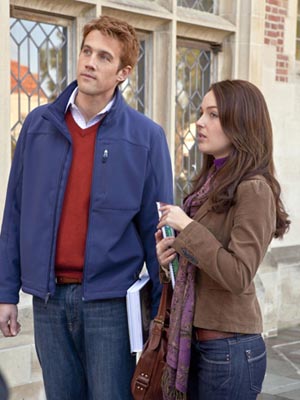 We’ve already shown you the trailer for William and Kate: the Movie, but ITN has got its hands on some extra footage.
The verdict from those who have seen it? So bad that it might even be worth catching—just to see how bad it can get.
And with a mere $3 million budget, it may well be the producer who’s laughing all the way to the bank.
The TV movie will air on Lifetime in the US on the 23rd and 24th and will be released on DVD in the UK on the 25th.
The American audience is already having fun with the adaptation, which takes many liberties with the royal romance of HRH Prince William and Kate Middleton.
New York magazine has the eight cheesiest lines from the TV movie, saying ‘This is a movie that makes The Prince and Me look like The Lion in Winter.’
The Guardian, meanwhile, got its hands on an earlier copy, noting the vehicles driving on the wrong side of the road (it was ﬁlmed in Los Angeles), lead actress Camilla Luddington’s mid-Atlantic accent (she is British, mind), and St Andrew’s College looking like an Ivy League university. Reviewer Stephen Bates says, ‘So bad it’s awful, toe-curlingly, teeth-furringly, pillow-bitingly ghastly. You begin to wonder what the happy young couple have done to deserve this.’
The Evening Standard’s Richard Godwin, meanwhile, writes, ‘Critics in America have panned this movie as a cheesy chick-ﬂick, but there are positives. It is recognisably a ﬁlm, in that it takes place on a screen. Events run in a forward direction.’

2 thoughts on “New footage from William and Kate: the Movie”