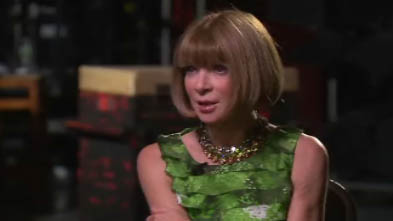 Our colleagues at CNN International have provided us with a transcript of their interview with Vogue editor-in-chief Anna Wintour, which we’ve detailed below for reader interest. You can see the entire interview online. Felicia Taylor is the interviewer.
The answers aren’t too far off what we would have said, say, six to eight years ago—digital access, discernment on whom to include, growing new talent and following their stories (which we did in 2003). The difference is that there’s a heck of a lot more power and money behind the Vogue name, and you can see that come through in many of Wintour’s answers. Pioneering: not really. Inﬂuential: absolutely.

Transcript
Anna Wintour, Editor-in-chief, Vogue: I think what we bring to the web site is really what we bring to the print version of Vogue, which is our access and our authority and very tough editing. I mean, there are a lot of websites out there that cover fashion and style and celebrities and cultural things that we do at Vogue.com but we’re, you know, very particular about who we feature and who we choose and who we put up on the website. So I think all that is coming through to everyone who looks at the website and the numbers are obviously indicating that.
Felicia Taylor, CNN International anchor: And some interesting things that you’ve done is added, you know, Twitter and Facebook pages and interviews with some of the editors which is truly innovative. What’s new and next for Vogue.com?
Wintour: Well I think any kind of things that we own, like we started after the 11th from the CFDA–Vogue Fashion Fund, which really has changed the landscape of American fashion. We’ve supported young designers who we believe in over the years. And this is the kind of access that we’re going to use on Vogue.com, following these young designers as they go through the Fashion Fund and eventually ending up at the dinner in November when we unveil the winners. And that’s really something that no other website can have that kind of access or authority or behind-the-scenes footage that we can on our web site.
Taylor: Do you think that there’s always going to be a place for a glossy magazine? Or are we about to really see the advent of the internet as being the more important place where eyeballs go?
Wintour: Well, I think the website complements the print version of the magazine and vice versa. I think they both offer very different experiences to the reader. I mean, one is a fantastic visual experience where you look at the kind of photography and read the kind of articles that you really can’t see anywhere else and it’s something that you can carry around with you and enjoy for months at a time. And I think you go to the website for a very different experience. Instant information, access. I mean, who was wearing what at the Tonys last night? What we saw at the result show this morning and it’s already up on the website. So it’s much more instantaneous but still edited with the Vogue eye and the Vogue access.
Taylor: Yet some have criticized Wintour for coming a little late to the internet party and even she admits that the relevancy of the web has become increasingly more important for business.
Wintour: I remember when we ﬁrst tried to get seats for people at the shows. The internet people were put like in the 20th row, if they were lucky, at a Chanel show. And we were told things like, you can only put ﬁve looks up because we don’t want anything to be copied. And then you fast forward to today and for whatever reason if we don’t put up a collection on the website they’re calling us up to complain. So, you know, obviously we learned with the internet explosion. I mean, we were as naïve as everyone else but we saw it grow. We saw it grow when we were at Style.com and then when we branched off onto our own website, you know, it was even more of an engrossing and interesting experience.
Taylor: So you mentioned Style.com and currently their readership is greater than Vogue.com. How do you intend to bridge that gap so that you also have the same number of eyeballs at Vogue.com?
Wintour: We launched the site in September so we’re a relatively new site. But we fully intend to get our numbers up, you know, within the next couple of years. We can access and authority and ability to connect with everybody within the industry. And, you know, whoever we call will pick up the phone.