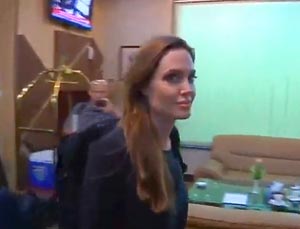 Angelina Jolie, actress and United Nations High Commissioner for Refugees (UNHCR) ambassador, arrived in Libya on Tuesday, touring Misrata. From a hotel in the main insurgent stronghold, Jolie spoke to media, praising the Libyan people.
The UNHCR has stressed that Jolie’s visit is in a personal capacity only, observing how UN aid is reaching both citizens and rebels. However, she will visit UNHCR representatives and other aid groups.
She said she had met Libyan ofﬁcials from all sides during her visit.
After speaking in Misrata, Jolie journeyed to Tripoli. She is scheduled to be in Libya for only two days.
The UNHCR is expected to announce a larger role for Jolie in the near future.

One thought on “Angelina Jolie visits Libya to observe aid, but in personal capacity”