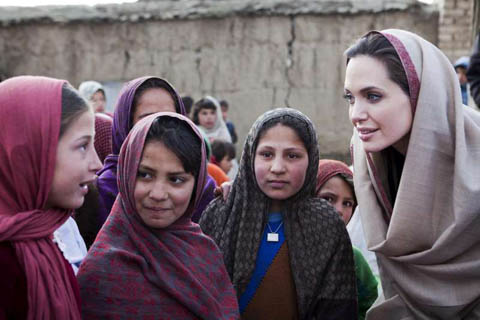 Angelina Jolie has been made a Special Envoy of the United Nations High Commissioner of Refugees’ chief António Guterres.
Jolie, who has worked as a goodwill ambassador for UNHCR for the last decade, has conducted over 40 field visits around the world to places such as Afghanistan, Bosnia, Haïti, Iraq and Sudan.
It is the first time the UNHCR has named a special envoy, according to spokesman Adrian Edwards. The role goes beyond that of a goodwill ambassador.
Jolie has, through her visits, become an expert on forced displacement, says the agency, and is an advocate for refugees. She has donated over US$5 million herself, which has helped to build schools in Kenya and Afghanistan.
‘In her new role, she is expected to focus on large-scale crises resulting in the mass displacement of people, to undertake advocacy and represent UNHCR and Guterres at the diplomatic level, engaging with relevant interlocutors on global displacement issues,’ says Edwards.
She will help facilitate lasting solutions to displacement caused by conflict, he says.
Jolie, 36, is one of the most talked-about celebrities in the world, and recently became engaged to actor Brad Pitt. They have six children, three of them adopted from Cambodia, Ethiopia and Vietnam.