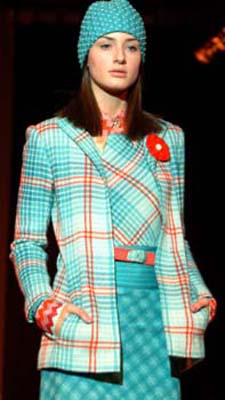 Above A design from the Missoni 50th anniversary retrospective, which Lucire covered in 2003.

Reports from Venezuela indicate that Vittorio Missoni, his wife Maurizia Castiglioni, two friends, whom Italian media have identified as Elda Scalvenzi and Guido Foresti, and two crew have gone missing after their plane disappeared from radar on Friday morning. Search and rescue operations are continuing. The reports have been confirmed by the Missoni company.
The plane, a Britten-Norman BN2 Islander, disappeared in the area the Los Roques archipelago. Its last known position was 18½ km south of Los Roques.
The Missonis were in Venezuela on holiday. Family members have gone to Venezuela to await news, say Italian media.
The Missoni company was founded in 1953 by Ottavio ‘Tai’ and Rosita Missoni, the parents of Vittorio, Angela and Luca, who now run the firm. Vittorio manages the business’s commercial and manufacturing side. It has sales of around US$100 million annually.
The company celebrates its 60th anniversary this year.
Five years ago, an aeroplane carrying eight Italian passengers disappeared in the same area, with the wreck never found.