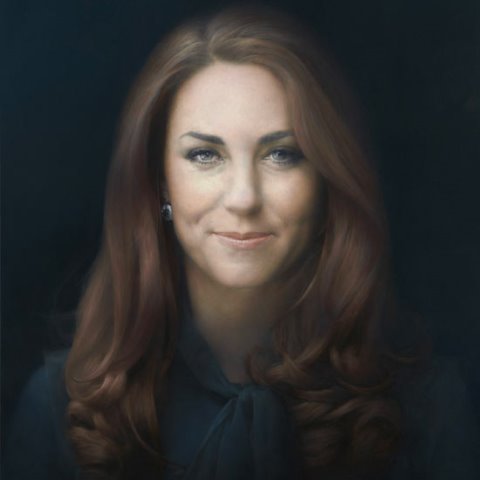 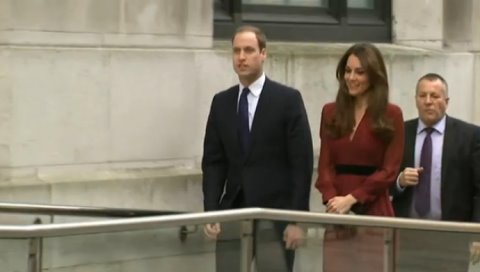 The Duchess of Cambridge’s first official portrait, by Glasgow-born artist Paul Emsley, has met with praise from the subject, who called it ‘amazing—I thought it was brilliant.’ Art critics, however, have been less kind.
The Duchess, who sat for the portrait at Emsley’s studio in Bradford-on-Avon, Wiltshire, and at Kensington Palace last May and June, had requested that she look like a real human being.
At the preview, the Duchess wore a burgundy dress by Whistles (see video below), and appeared healthy despite an earlier and serious bout of morning sickness late last year, which saw her admitted to hospital.
The Duke and Duchess of Cambridge had had a preview of the portrait at the National Portrait Gallery on Friday morning before the official unveiling later that day.
The work had been commissioned by Sir Hugh Leggatt for the Gallery in memory of art collector and philanthropist Sir Denis Mahon. The Duchess chose Emsley herself from a shortlist.
The Duke echoed his wife’s thoughts, saying, ‘It’s beautiful, it’s absolutely beautiful.’
The portrait is now on display at Room 36 of the Gallery.
Some critics were disappointed that the Duchess is not smiling and that the portrait shows the shadows and lines under her eyes. Waldemar Januszczak told BBC News that the Duchess’s eyes lacked sparkle and that she looked ‘dour’. However, Richard Stone, who has painted many members of the royal family, said the painting had an ‘informality’ and ‘warmth’ to it.