Amid the bustling of holiday traffic, a layover, and no time for tea, I took a moment to speak with prominent talent, Yasemen Hussein. The London-based artist and creative all-star designs exceptional artworks that are both captivating to the fine art tenderfoot as well as any artistic mastermind. 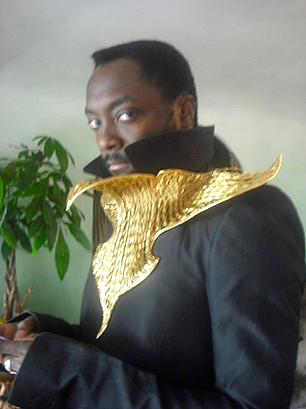 As I found a quiet space nestled in a corner of the airport, a few of Hussein’s designs came to mind: from the beautifully sculpted golden shield commissioned for Will.i.am (right) to the Marie Antoinette metal wig with antlers emitting from it called, Diana, exhibited at the Museum of London in 2010, which she also categorizes as one of her proudest pieces.
Hussein’s art has intrepid layers. Whether fine-tuned in an extravagant coiled headdress or in the sparkling of Swarovski Elements (e.g. over 25,000 lavish crystals she used to create an outfit for Katy Perry’s American Idol performance of the single, ‘E.T.’ [below]), Hussein’s pieces speak for themselves!
Outside the creative world, many people may not ponder in detail about the artist or designer behind such avant-garde works that a stage performer might wear. Some may even think it to be entirely the vision of a marketing team or performer themselves. Yet, however wonderful the end result is executed, it does start with an artist’s eye and most certainly one that can take on a mighty challenge transcending the intangible or conventional methods of design.
Every designer has a process of development, perhaps a special moment when they are entirely in the zone of their body of work. For Hussein, an alumna from the Penland School of Crafts, getting in that zone means being fully open to experiment without limitations.
‘I came from a strict working class Turkish–Cypriot immigrant family where I was expected to live the norm of marriage and children. The UK gave me grounding and a true understanding of the importance of research and development. Living in the US gave me the time and experience to understand … to do anything I wanted without creative boundaries,’ said Hussein.
Clothing has the ability to create an image, displaying expressions of one’s mood or style. Mere shoe choice can even make or break an outfit’s buoyancy! Then, there are forms of wearable art that need no special introduction. It’s the one-of-a-kind bells and whistles: the statement pieces, timeless accessories, and other fashioning elements that fairly garner a worthy showcase all on their own. Hussein’s designs are just that!
With an eye for structure, an appetite for the bold and underlining æsthetic of sculpture, her art merges the love of working with diverse materials such as metal, glass, and clay. She somehow transforms the initial vision into a forward-thinking wonderland.
‘I secretly love the smell of metal when it’s been heated up to a cherry red and the sound it makes when I quench it in water,’ confessed Hussein. But, don’t place too much of a label on her artistic style, she’s a designer who is awe-inspired by a multitude of things. ‘I don’t really think about it or guide myself towards something, I just do it. My style is what I gravitate to, whatever has influenced me,’ said the designer.
So, what advice would a celebrated and very down-to-earth designer give to aspiring artists? ‘You really do have to love what you do. There really is no winning formula, you have to create your own. Unfortunately it’s not always down to talent. I hate to say it, but a whole chunk is a business mind, patience, and timing,’ said Hussein.
Needless to say, this was one layover with a chock-full of inspiration that I will not forget!
You may catch more of Hussein’s (headwear) pieces currently being showcased in the must-see Head On exhibition at Fashion Space Gallery in London. She joins a roster of designers, including catwalk looks by Donna Karan, Gareth Pugh, and A. F. Vandevorst, as well as millinery works of Stephan Jones and Philip Treacy, amongst many others. The exhibition will run through March 23, 2013.
For more information visit www.yasemenhussein.com.—Tamara Madison 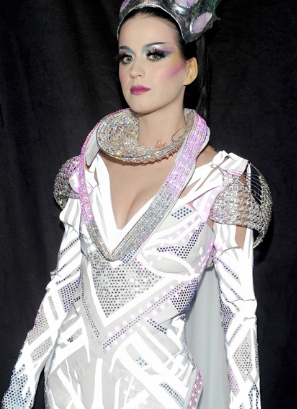 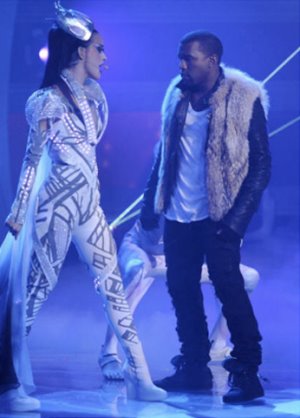