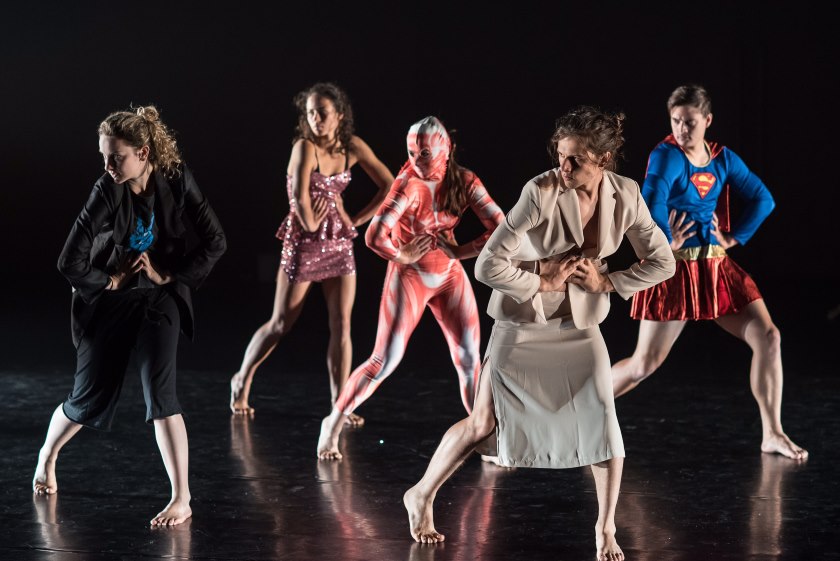 Footnote New Zealand Dance’s NOW 2016 (New Original Work) programme, which hit Wellington tonight after performances in Auckland, presents four original works by New Zealand choreographers Julia Harvie, Sarah Knox, Lucy Marinkovich and Jessie McCall. It’s a particularly enjoyable programme, mixing meanings, humour and, in the case of Elephant Skin, a lot of balloons.
Each performance begins with a voice recording that sets the stage for the dance that follows, although viewers are still invited to make their own interpretations.
Centerfolds (sic) begins with a humorous look at gender stereotyping, with the company’s male and female dancers wearing masks with a bun and dresses, signalling that we often take these cues and make automatic assumptions about a strict male–female duality. Marinkovich looks at roles such as waitress, housewife, heroine, songstress, supermodel, and others, questioning our conditioning; and while not every role appears as costumed characters, they are represented through the varied music choices. Masks play a part throughout, along with multiple costume changes, ensuring that Centerfolds never drags for a moment.
Your Own Personal Exister is one of our favourites, as it examines not only existentialism but its opposite, inauthenticity. McCall does this with the notion of how, at a children’s birthday party, we feel the centre of attention when we wear our paper “crown”, but what if that crown was never removed? It’s an allegory of the selfie era, the “look at me” validation some seek. Three of McCall’s dancers don crowns, but one doesn’t, although he is unaware of this till some way into the performance. Yet this need consumes him eventually, and he joins the inauthenticity of the others.
One of the regular techniques here had dancers opening their mouths facing upwards while recorded voices played, which worked particularly well, and the voiceover was poignant at the conclusion of the performance (which we won’t spoil here). And what happens when that crown is removed, where does that leave us? Despite the smaller number of Footnote dancers involved, this was a particularly powerful work that was danced beautifully.
Elephant Skin takes a humorous look with balloons landing on stage at random points, sound effects creating more laughs, and a particularly brave dancer blowing up a balloon till it popped. Harvie explained in a post-show forum that she wanted freshness and tension in the performance, because as humans, we are problem-solvers, and the dance, too, should solve the problem of the randomly placed balloons. There was, of course, an overall structure which the dancers worked around, and one scene where white balloons stood in for clouds as one performer floated across the stage, before the others began popping the cloud around her.
Harvie also noted that she has a fascination with balloons and that they have a human element to them.
Disarming Dissent is the most energetic of the four in terms of getting the dancers to generate forceful movements, and by this time one is marvelling at their stamina. Rowan Pearce’s music reached crescendos twice as the energy built up. Dance, exercise and martial arts combine here as Knox talks about the fight we have against the system, but then how we pacify ourselves, drawn back by either that very system or our own impulses.
The Wellington première at Te Whaea had a unique forum at the end which featured the dancers, Harvie, general manager Richard Aindow as host, and artistic liaison Anita Hunziker.
The Auckland performances have been (April 15–16), Wellington has one more night (21st, at Te Whaea), Dunedin is on April 28 at Mayfair Theatre, and those in Invercargill will see NOW 2016 on May 1 at Centrestage during the Southland Festival. For tickets and information, head to footnote.org.nz.—Jack Yan, Publisher