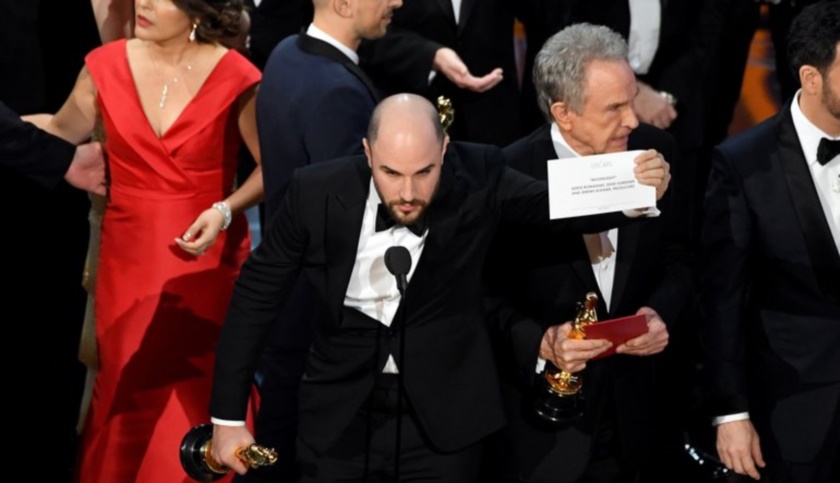 In a move echoing that of Miss Universe host Steve Harvey in 2015, actor Warren Beatty read out the wrong name for Best Picture at the 89th Academy Awards.
La La Land was announced as the winner at the 2017 Oscars on Sunday night, but the actual winner was Moonlight.
La La Land’s team were already on stage giving their acceptance speeches until its producer, Jordan Horowitz, said nonchalantly, ‘There’s a mistake. Moonlight, you won Best Picture.’
Beatty said that he had been handed the wrong envelope, its contents saying ‘Emma Stone, La La Land.’ Horowitz backs up Beatty’s version of events in the video below.
Host Jimmy Kimmel made a reference to Harvey’s gaffe, when he read out the wrong winner at the beauty pageant.
The gaffe almost overshadowed other wins on the night being the 2017 Oscars’ most talked-about moment.
Damien Chazelle was Best Director for his work on La La Land.
Casey Affleck won Best Actor for Manchester by the Sea. Supporting gongs went to Viola Davis and Mahershala Ali, who became the first Muslim to win an acting Oscar.

The mishap at the 2017 Oscars, by Entertainment Tonight

Best Costume Design
Colleen Atwood, Fantastic Beasts and Where To Find Them