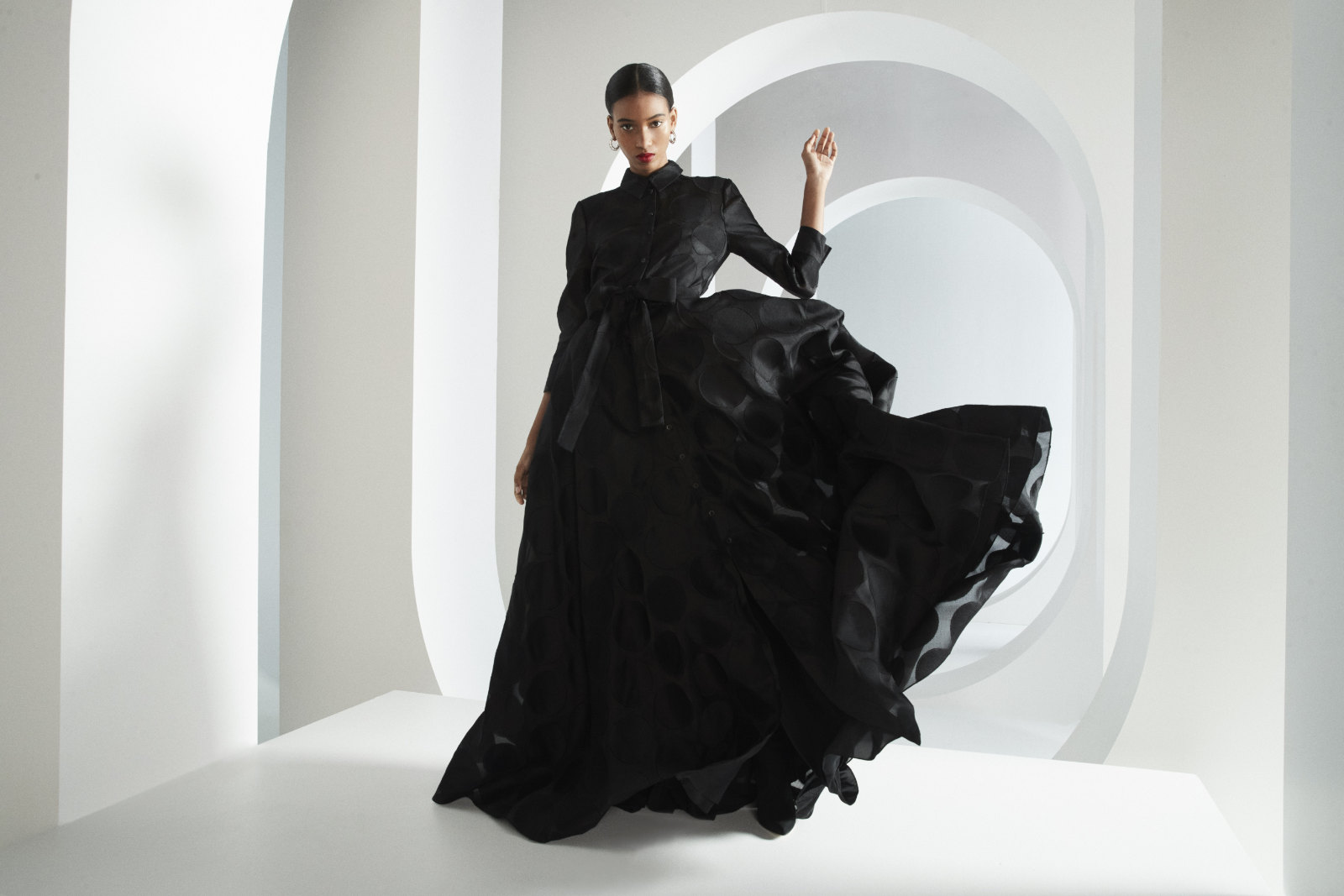 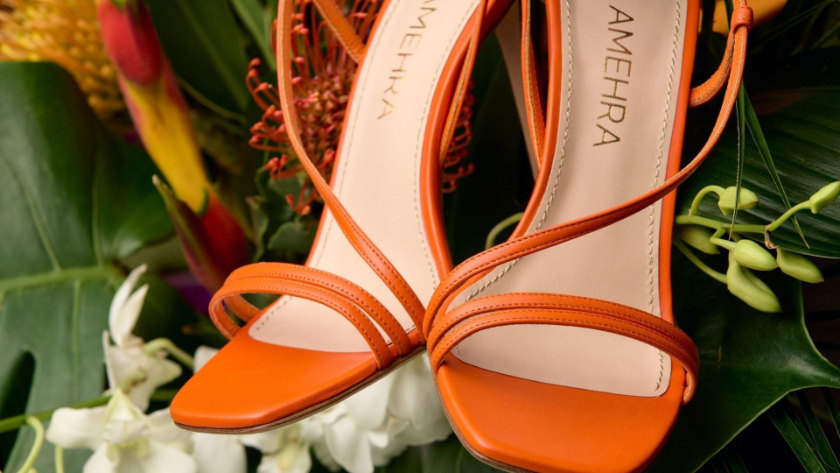 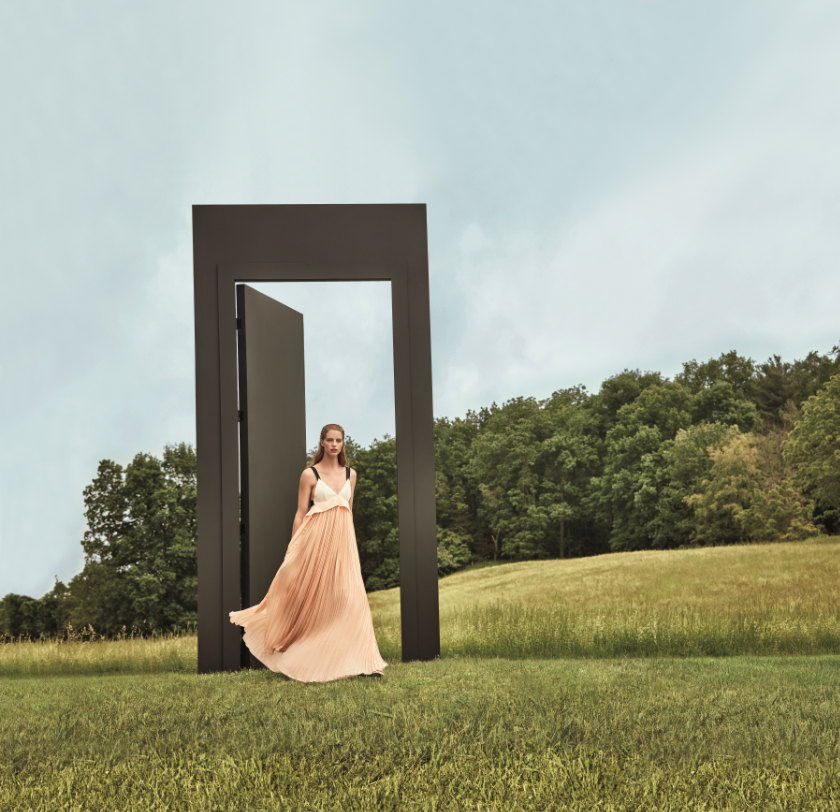 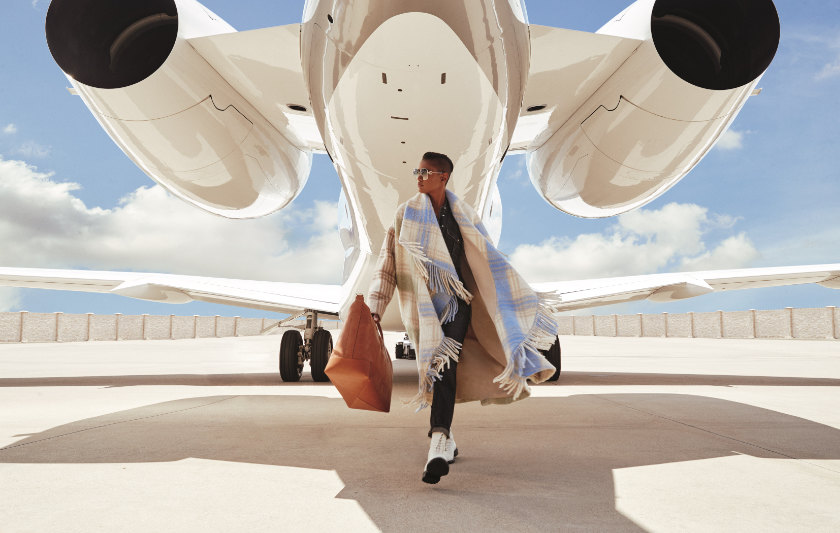 Top: A close-up of an Amehra design. Centre row and above: Images from Neiman Marcus’s fall 2021 campaign.

Amehra is a luxury creative footwear brand created by the visions of Persian-American brother and sister, businessman Arash Arabian and creative director Mehrnoush Arabian. Amehra’s designs are carefully designed through distinct silhouettes, vibrant colours and intricate details. With a strong background in supply chain, retail and ecommerce, the duo aims to merge sustainability with chic luxury designs.
As well as a focus on sustainability, Amehra’s designs are modern, detailed and quality, creating a new standard of footwear artistry. Pieces such as the Bella sandal, constructed of GOTS (Global Organic Textile Standard) peach satin and light peach crystals; the Avenue slingback in a yellow and black zebra print; as well as Amehra’s signature style Amore sandal, combining to create a modern collection that reflects luxury and functionality.

Neiman Marcus has launched a campaign for autumn 2021, called Re-introduce Yourself, based around the theme of people re-emerging from COVID-19 restrictions and sharing what they have learned.
The campaign has been shot in Art Omi’s sculpture and architecture part in upstate New York, the Million Air runway in Dallas, and in the studio. The campaign video breaks in mid-August and has been directed by Anaïs Larocca and produced in partnership with the Mill.
Neiman Marcus is also bringing back The Book, with the latest edition featuring interviews with Gabriella Hearst of Chloé and Virgil Abloh of Off-White and Louis Vuitton.

The British Fashion Council (BFC) has released the date of its highly anticipated Fashion Awards 2021. They take place on Monday, November 29 at the Royal Albert Hall, London. The Fashion Awards 2021 will celebrate important figures who have had great impact on the fashion industry, warmly inviting brands, creatives, designers, artists and tastemakers to come together.
Following the same format as last year’s awards, the Fashion Awards will honour and celebrate the category of Leaders of Change; figures and brands in the fashion industry that have created positive change in the categories of environment, people, community and craftsmanship, and creativity and culture. Other awards on the night include special recognition awards, such as the Outstanding Achievement Award, the Isabella Blow Award for Fashion Creator and Fashion Icon. The nominations for these awards are determined by a panel made up of over 800 key members of the international fashion industry, which will commence in September.
The Fashion Awards will also help fundraise for the BFC Foundation, which advocates for the growth and success of the British fashion industry through education, grant-giving and business mentoring. The Fashion Awards were able to raise £1·7 million for the BFC Foundation in 2020–1, as well as support 33 designers and numerous students through financial support grants and mentoring. The Fashion Awards anticipates to continue to support and promote growth of the fashion industry, whilst recognizing its influential figures.—Yuriko Shiratori and Lucire staff