Meet Samper: a new lease of life away from a circus or procession

Nothing and everything, spiritual India has it all

VOLANTE India is nothing and everything, and so much that leaves appreciating tourists utterly speechless, writes Kip Brook

They say there is no present like the time and no time like the future. India is all about the here and the now for its 1,350 million people. What is at dispute is some saying that India is an assault on your senses.

Some see squalor, poverty, filth, terrible conditions but for us, and others, India is so divine, so spiritual, fun, exciting and embracing. It has a warm spiritual side of life where living is a privilege, not a right. We have tasted many countries and many cities. Now we can’t wait to get another taste of India; or very kind people; amazing food; sights and sounds.

For New Zealanders, we needed to prepare for any hiccup. We had all bases covered for health issues and upset tummies. We ate street food, restaurant food, hotel food—but never western food—and we felt the healthiest, happiest and never had any issues, especially after worrying how to cope with squat toilets. The food was just amazing.

Our first moment of excitement was at Indira Gandhi international airport in Delhi where we went to check-in for our Air India flight and a staffer told us they were offering a 50 per cent discount on business class seats for our flight to Jodhpur. We felt in the mood for a treat, especially after a nine-hour transit at Changi in Singapore and six-hour wait at Delhi domestic. But when we went to board, the airline staff told us the flight did not have any business class seats! We learned the first rule of India, there’s always a bright side.

As our plane prepared to land; the captain announces no photos are to be taken of the airport. A nice young guy from Delhi next to us explains it’s because of a lot of military and fighter planes aimed at Pakistan, just in case of any attack a few hundred kilometres from the border.

All the fighter jets are stationed under bunkers covered over on three sides to look like dirt mounds from the air. When we get out of the plane, we see large signs saying ‘No photography’. Because of the last-minute chaos at Delhi we worried if our bags would ever arrive on the antique looking conveyor belt of bags, delivered from the plane by tractor and rickety old trolley cart into a grand old terminal building.

One by one, five cart-loads of bags arrived on the belt but no sign of our bags. Then the sixth and last cart arrived and there they were. Jodhpur here we come. The footpath-less streets lined with trees, with dusty sandy edges, neat piles of rubbish, dusty looking shops, 19th-century carts carrying produce pushed by their owners, mangey dogs, cows, stalls selling brightly coloured textiles quickly transformed into tiny alleyways too narrow for cars to pass and just enough for tuk-tuks.

We thought we were in a slum or rundown area, but suddenly out driver turns left through a sandstone arch into our Raas hotel courtyard on a neat cobbled courtyard. It was like arriving at a five-star oasis, because, it was a five-star oasis. We were given a gracious and humble welcome by staff immaculately dress in neatly pressed Indian clothing. Mac, not the name expected at a far-flung hotel in the That desert land of India, took us to our room, via an inviting crystal clear large blue swimming pool with a little waterfall running toward loungers covered under cream canvas canopies. We had finally arrived in India, in the ancient walled desert city of Jodhpur, the second largest city of Rajasthan.

We freshened up and got the hotel’s signature blue tuk-tuk to take us to the central city’s Sardar market, for ₹200 there and back. Within a day we would just walk there in five minutes. The markets were bustling, rammed with rickshaws, motorbikes, bikes, cows, women carrying larger piles of produce of textiles in bundles on their heads, mangey dogs and horses, just organized chaos which works magnificently. We stepped very warily on the wobbly cobbled uneven road and alley. We were taken by our first kickback “friend” to a textile market and had our first hard sell by a shop hustler. He said they had eight floors, all like a jungle of textiles. We wanted to believe him, but you are never quite sure.

Our first evening meal in India on a rooftop restaurant with the imposing 750-year-old Mehrangarh fort lit up and bearing down benignly on us was a slice of heaven, more tasty, tangy, different and more divine than we ever imagined. We had dreamed of this moment for some time. And here we were at last. The staff were genuinely kind, friendly, gracious like something we had never experienced anywhere around the world before. We felt humbled and not for the first or last time we began to understand why we had always wanted to enjoy India.

The next morning, we were gently woken by the soothing sound of a daily pre-dawn Islamic prayer over a nearby loudspeaker. The hotel offered ear plugs, but the prayers put us in a mood to enjoy the gift of India each day. After a delicious Raas Indian breakfast we walked up to the fort. It was another clear, sunny day of 37°C and on our way down we met a man who was running a new restaurant, Indigo Blue, who was very warm and self-effacing. A bit further down the hill we stopped for a break and started chatting to two women, one of whom drew a henna (painted pattern like a tattoo which lasts for a week or so) on my partner’s hand and arm. From that point we just lost ourselves in the tiny alleyways, looking into copper, spice and textile shops.

Someone then approached us and said he knew of the vest textile shop for us. All genuine, but how gullible we were as first-time tourists to India. So, this guy took us down the tiniest of back alleys that were so narrow I just wondered what might become of us but then we arrived at this shop.

The shop manager told us Richard Gere and Mick Jagger had bought at his shop and he showed us international magazines like Vogue that had run articles on it. He may have been right. Our salesman spent half an hour laying our different fabrics of different qualities, colours and styles until we were under his spell and bought a lot—at not cheap prices—and had the goods posted back to New Zealand.

The author and his partner in Jodhpur’s old city

The days rolled into one inside our walled city, as we got a Muslim tuk-tuk driver to take us to a Hindu temple and then to the grand Uwaid Palace. Another time our tuk-tuk driver Haargi took us to the old blue city, which is how Jodhpur got its name as most of the houses in the old city are painted blue. The streets and alleys got narrower that it seemed impossible for bike and tuk-tuk to pass. The alleys became tinier, older, possibly dirtier as we started drifting back to the 15th century. We were lost in time. It was amazing place. So old, tiny, cramped strolling through tiny lanes of blue painted houses or homes where people had lived for centuries. There is something spiritually cleansing about Jodhpur—a city seemingly without any tagging or graffiti.

Our next stop was Jaipur, a six-and-a-half-hour drive along a very worn and bumpy road at first but then smoothed out to a tidy motorway as we drew closer to Jaipur. We saw lots of cows, goat herds, camels, monkeys, women in red clothing cutting millet and mounding in stacks in the paddock. It was very dusty and hot going through. We stopped just once. The toilets were very clean, but the men’s had no running water and the women’s had no toilet paper.

We entered the pink city of Jaipur, a bustling largely modern city of seven million people, much more westernized then Jodhpur. We wandered around our local park in the early evening and joined in a game of cricket with some 11- and 12-year-old boys, who were very competitive.

We enjoyed the contrasting sights of the City Palace, the amazingly honeycomb-shaped Hawa Mahal and the astronomical designs of Jantar Mantar, which is the site of the world’s biggest stone sundial. Scenes of beggars, old people, Mums and little children, people sleeping on the streets, hawkers and hustlers, horses, goats, cows, moneys and chickens is everyday life here.

We enjoyed the intensity and bargaining at Bapu Bazaar and came away with shawls, a camel skin bag, jewellery and an elephant shirt.

The next morning, we headed off on what would be a highlight of our trip: to spend a day with “our” elephant. Elefantastic owner Rahul told us all 24 elephants were domesticated from circuses or had been used for various processions. Our 52-year-old one tusk female Samper had such a lovely nature. We fed her cane, washed her, sat on her while she pelted water on her back from her trunk; we took her for a walk along with another elephant who was 33 and blind.

It was a very slow plod—with her mahout Raju—out around the hot, dry dusty fields, full of rat holes, cows, bulls and calves.

This was an unforgettable lovely day. We left privileged to have been so close to Samper just for that day. We didn’t visit the jewel in Jaipur’s crown, the Amer Fort, as it has elephant rides to the top of the hill and we feel people should start boycotting the use of elephants just for this purpose.

Our other memories of Jaipur were the busy streets of our suburb Raja Park, where we stayed at an outstanding Airbnb Aman Home Stay, where our hosts Pammi and Surjit could not have been warmer, more generous, more supportive.

Our last two days were in Delhi, staying at the Radisson Blu hotel which was perfect transitioning spot before heading back to the western world. We even shared a bottle of Indian-made red wine.

We had a brief visit to Connaught Place in the epicentre of New Delhi via a clean, efficient train metro service. Interestingly, for a city of 25 million, the haze or smog was very light. A latest World Health Organization report says India tops a list of countries that recorded high numbers of child deaths linked to air pollution in 2016. At least 14 of the 20 most polluted cities of the world are in India, according to the WHO. We had the best of Delhi days.

So, sadly at last, our exciting adventure was over. India beckons in 2019. • 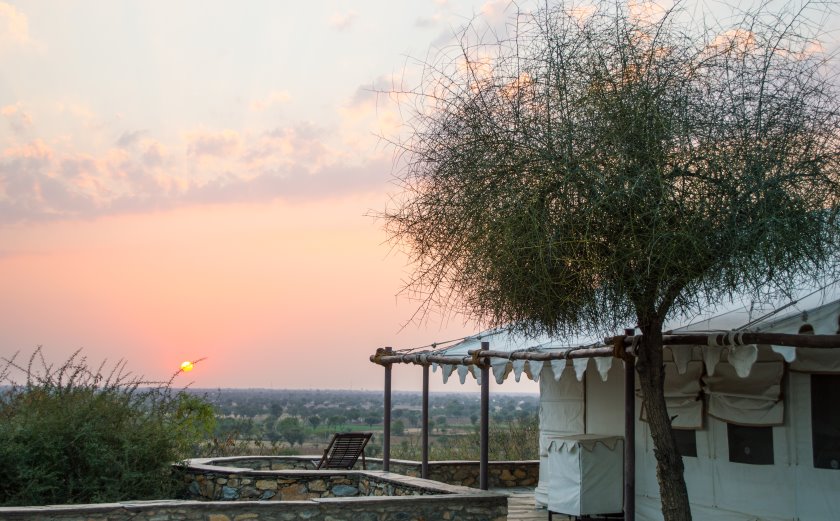 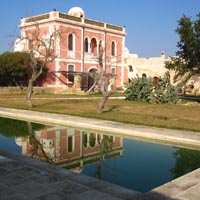 From Jodhpur to Firenze, via Lisboa and Puglia
Travel editor Stanley Moss ﬁnally gets to Jodhpur, and ﬁles reports from Lisboa, Puglia and Firenze
Photographed by the author 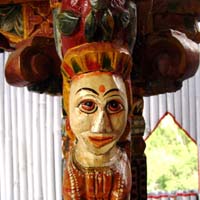 Shanti, a home with soul
Stanley Moss finds Shanti Home a genuine experience, where he can feel the soul of India
Photographed by the author