First published in the May 2020 issue of Lucire KSA

Paris’s ready-to-wear autumn–winter 2020–1 collections celebrated nonconformity, taking parameters and breaking them apart, as well as exploring the dark underbellies of many social symbols drawn from everyday life. We saw dark shapes but we also saw colour, bold and fearlessness. We saw designers that worked with rich fabric, velvets and overcoats that draped across the models’ bodies, and capes and hoods that obscured their faces and shrouded them away from the audience. There was an atmosphere of fantasy, of mystery and unknown forces at work. Other designs were more simple, but enriched with colours made to strike out the cold. We saw the exploration of rigidness but also a liberation, an energy that lurked deeper than that of the shadows. The shows were a wonderful experience and each designer brought a sense of themselves and their brands to the catwalk, showering the audience in their presence and identity and making this season’s prêt-à-porter shows a lasting experience.

Chanel designer, Virginie Viard, took inspiration from a 1980s photograph of the late Karl Lagerfeld and his muse, Anna Piaggi. The collection that followed was one that focused on liberation, nonconformity and unforced, unapologetic potential. Taking Edwardian-revival finery elements from the photograph where Piaggi is veiled in a Death in Venice hat and Lagerfeld is wearing a morning-dress striped jacket and vest and floppy black silk cravat, jodhpurs and sturdy riding boots, Viard has remastered the classics with liquid black velvet and scalloped-motif “seven-league” boots modelled after those of Lagerfeld. We saw the motif of the horse carried through into woven lace, a rearing Pegasus in stripes suggesting satin jockey armbands, playing homage to Gabrielle ‘Coco’ Chanel’s passion for horse racing. We also saw her famous pink racing colours alongside a sophisticated black-and-white palette, complemented with cabochon jewels of the Byzantine running across the belts and necklaces. We saw this all alongside the jodhpurs that flapped open over the boots, the below-the-knee skirts, coats and detailing such as scalloped edges on the tweed skirt suit, ruffles forming the collar of the taffeta raincoat, and white lace for the blouse flocked in imminent blue velvet. The collection was overall a wonderful experience with so much to see and absorb, so many influences to enjoy and so much brand history to behold and treasure.

The refined collection by Leonard Paris designer, Christine Phung, tackled the re-invention of bourgeois basics. Out came silky house classics in soothing floral shades, oranges, reds, blues, yellows and blacks. We saw technical neoprene fabric coats, chunky wool tweeds, capes and pencil skirts, and masterful embroidered leather flower patches for a deeper sense of luxury. The materials were opulent, shimmering across the catwalk as the light bounced and celebrated every inch of the silk blouses with the signature house orchid print along the sides. There were high-waisted pants with ’70s style flares, and transparent taffeta windbreakers with puffy sleeves and ankle-skimming gowns. This collection paid an alluring homage to retro upgrades and asymmetry, the garments playful, airy and simply elegant and brimming with charisma.

We saw three different sides of luxury with Andrew GN’s collection, colours so rich and majestic that the garments took the audience from this world and deep into another. The collection was ethereal, indulgent and sophisticated, starting off with editorial styles in blacks, whites and royal golds. We saw vintage handcrafted buttons, overcoats and knee-high boots in silver and gold. Then came a flood of jewel-tone dresses, sultry and meticulously pleated in purples, yellows and pinks. Then the sky opened up and we had pure fantasy, a mystical path drawn with golden griffins reigning on overcoats, long black gowns and oversized tweed coats with woven gold and silver designs. Drawing inspiration from the 1976 American–Soviet children’s fantasy film The Blue Bird, and other Norwegian fairy tales and mediæval mythology, the designer took these final looks to the next level with velvet appliqués outlined in beading, stars bursting across the backs of the models and rich Byzantine jewels to give the finalé of the collection that out-of-this-world, ethereal sensation. Overall the collection told stories, lavishing up new mysteries with each step.

The collection of Balenciaga’s designer, Demna Gvasalia, took on dark and sinister shapes modelled after his own experiences in the Orthodox church in Georgia and after research into the Spanish Catholic origins of the designer and founder of the brand, Cristóbal Balenciaga. This collection was based on dress codes, religious purity, minimalism and classicism, taking social symbols and turning them into garments that took sharp turns on the catwalk. What we saw were augmented faces, a parade of authoritative figures in long dark robes, faces partially covered and shrouded in hoods and collars that came up and clutched at the neck. We also saw flashes of reds, whites and yellows, snatches of colour in the dark. Models walked suspended upon a stretch of water in the dimly lit room. We also saw leather biker suits and tiny neoprene suits, and shiny cloaks upon the models’ shoulders. The whole collection was temporal, communicative and striking in a completely upending fashion that was thrilling and daring till the very last second.

Vivienne Westwood’s designer, Andreas Kronthaler, had a collection that was a vibrant collision of the elements, each garment like its own show, coming in all shapes and sizes. Inspired by a revolutionary French style mixed with Pagan holidays, we saw the festivities and rituals of May come to life with a white shrouded garment with strips of multicoloured fabric crowning over the look. We also saw hyper-baggy tracksuits, lighting-print ponchos, parkas and blousons. Garments were layered, sweaters and streamlined blazers making bold silhouettes on the catwalk. We saw a torn white trench coat over a faded Union Jack flag dress and Bella Hadid in a Boadicea-inspired wedding dress made with two types of lace and a duchess corsetry. The frothy headpieces and fearless garments made their own presence under the roof of Hôtel de Ville. The collection was the noise of many different instruments coming together in symphony, an explosion of abstraction. Like the moment just before a great idea is born.

The sleek, sombre editorial collection of the new creative director of the Kenzo brand, Felipe Oliveira Baptista, was a continuation of the brand’s legacy in luxury couture. Here we saw oversized tailoring, bespoke dark leather pieces and in-style hats that obscured the models’ faces alongside bonnets and headscarves. There were also snap-button tunics, felted sweaters, parachute midi-dresses and ’80s-style shearlings that took classic outerwear shapes to the next level. We saw tonal embroidery of the distinctive Kenzo tiger-head and collages of feline print fabric in collaboration with the estate of the mid-century Portuguese artist, Júlio Pomar. The designer also bared some of his soul, with inspiration being woven in from his upbringing on the Azores islands where traditional hooded garbs are passed down from mother to daughter throughout generations. This collection overall was full of bold earthy tones, mixed in with luxury dark shades, carrying a sense of purpose and a wealth of affluent high-fashion style. •

Coat tales
With winter fast approaching there is no better time to invest in the perfect coat. There is a plethora of options when it comes to outwear this season, from classic camel to textured plaids, and coloured and quilted. There is something to suit any mood, writes Sopheak Seng 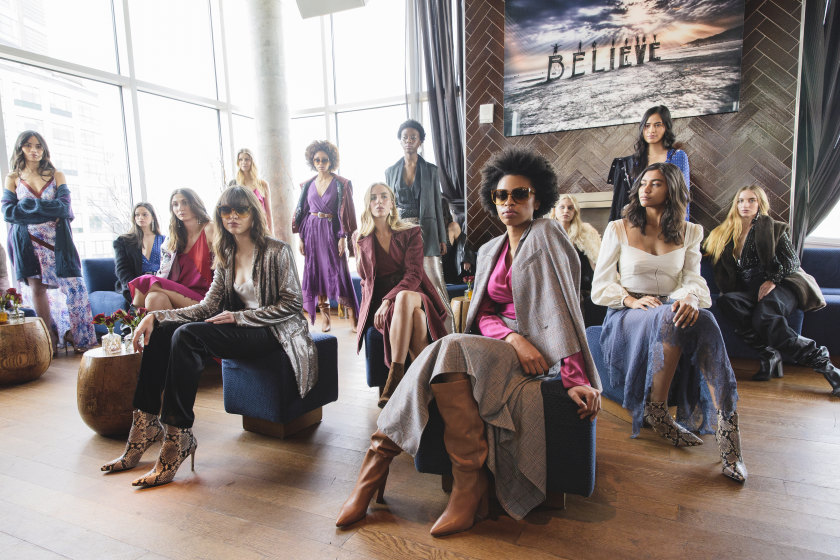 Mad for Madrid
It might not have the same cachet as Paris or Milano, but Madrid has plenty of energy and colour to make it one to watch. We look at our favourites from its fashion week
Photographed by Ifema/Ugo Camera